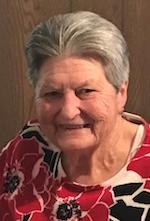 Funeral service will be held at 11:00 a.m., Tuesday, June 8, 2021, at Watson & Sons Funeral Home in Center with visitation an hour prior.  Bro. Ron McLellan will officiate. Interment will follow at Oaklawn Memorial Park in Center.

Born April 23, 1933, in Ferriday, Louisiana, Carol is the daughter of Henry Daniels and Ruby Stevens Daniels.  She earned her BA in nursing and became an RN. Carol was a dedicate wife and mother. She enjoyed cooking and cherished the time spent with her children and grandchildren. Her hobbies included coloring and gardening. A dedicated Christian, Carol was active in her church and other Christian organizations. She was a member of Gloster Baptist Church, where she taught the 4 and 5 year old children’s classes with Hall Burford for many years. After retirement, Mr. & Mrs. Cook traveled the country doing missionary work.

Numerous nieces and nephews; other family; and a host of friends.