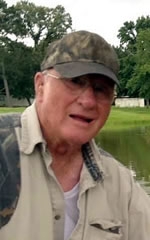 Carrol Ray Livingston, known as Bill, to family and friends was born on November 16, 1926 in Center, Texas, and died on August 12, 2020. He was born to Louis and Della Livingston and was one of thirteen children.

Bill and Dora Jean Bailey were married on August 21, 1949. They had 4 daughters, 10 grandchildren, and 20 great grandchildren.

At the end of WW II, Bill served in the army as a truck driver during the occupation of Japan.

Following that, Bill had many jobs, but his main occupation was working at the Pasadena Paper Mill from 1953 until 1985.  While working at the mill, he and Dora started a company manufacturing seat cushions for Igloo.  They continued this until the late 90’s when they decided to retire.

While spending most of his adult life in Pasadena, Texas where he and Dora raised their family, they eventually moved back to their hometown of Center.

As an avid hunter and fisherman, Bill loved nothing more than to spend his time doing both of those, especially with the ones he loved.

Bill had many wonderful qualities, but if you ask anyone who knew him, they would tell you his best quality was his love of his family.

Online condolences & tributes can be sent at www.watsonandsonsfuneralhome.com.