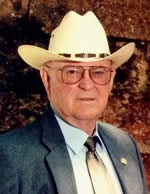 "George" was born December 5, 1942, in Angelina County, Texas, to parents Dallas and Marjorie Beckham Russell. George had lived most of his life in San Augustine County, Texas, before moving to Nacogdoches County, Texas, in recent years. He was a member of Stallings Drive Church of Christ.

He was preceded in death by his parents, Dallas and Marjorie Russell; and his brothers, Ruben Russell, Garey Russell, and Gene Russell.

In lieu of flowers, the family suggests memorials to the Shriners Hospitals for Children.

Visit www.WymanRobertsFuneralHome.com for memories and condolences.

Arrangements are under the direction of Wyman Roberts Funeral Home in San Augustine, Texas.