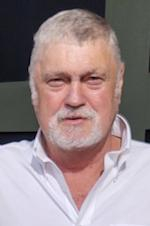 Funeral service will be held at 10:00 am on Wednesday, November 23, 2022, at Taylor Funeral Home, Timpson, Texas, officiated by Orval Miller. Interment will follow at County Line Cemetery.

David grew up in Bryce, Texas. He graduated from Gary High School. David met Vicki Courtney Hailey at Ida, Louisiana while working on a drilling rig. They were married for 11 years. Ole Milwaukee had his CDL since he was 18 years old. He once drove a school bus on his own field trip. David enjoyed drag racing and watching old movies and westerns. He was happiest when spending time with family. David was a member of Word of God Church in Shreveport, Louisiana. Ole Milwaukee or Goldie, as he was affectionately known, will be greatly missed by all who knew him.

David is survived by:

Along with numerous nieces, nephews, and friends.

He is preceded in death by his father, Tommie Roscoe Bryce; brother, Tommie Lee Bryce; and sister, Linda Kovar.