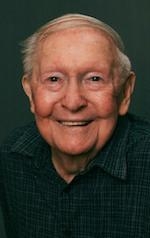 Graveside service will be held at 3:00 p.m., Saturday, March 6, 2021, at Oaklawn Memorial Park in Center with Rev. Darwin Parrott officiating. Visitation will be held prior, beginning at Noon.

Born August 27, 1926, in Wells, George is the son of the late Leonard Darwin (LD) Parrott and Nora Diamond Nail Parrott of Center. Immediately upon graduation from Center High School Class of 1944, George voluntarily enlisted for service to his country, serving in the United States Navy during WWII in the Philippines, Iwo Jima and Okinawa stationed aboard USS LSM327.  Honorably discharged at the rank of Yeoman 3rd Class he was awarded the American Defense and Pacific Theater ribbons. George went on to make a 40-year career at Shell Chemical in Deer Park while raising a family in Pasadena.  Following retirement he moved to the Folsom Chapel Community, where he and his beloved wife Christene lived for 25 years. His last 10 years were spent with his son and family in Cypress.

Memorial donations can be made to DePelchin Children’s Center at https://www.depelchin.org