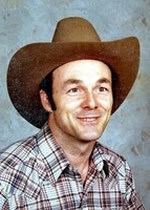 Jasper “Lin” Lindon Marcantel, 71, passed away March 25, 2021 at U.T. Health in Tyler, Texas from complications after a fall. Lin was born on September 14, 1949 in De Quincy, Louisiana to Jasper Sidney and Doris Marie Cole Marcantel. He resided in Bronson, Texas until his death.

Lin was known by all for his great leather work which he started at a very young age. He was the owner of Lin’s Custom Saddlery in Bronson, Texas. Where many of his friends enjoyed coming by for a visit and to hear what new stories Lin had to tell. His knife making friends always came on Monday to have him make sheaths for them.

Lin worked for several western stores before working for Texas Parks and Wildlife where he retired from. He continued working in his leather shop up until his death.

He was a member of Bronson First Baptist Church. He dearly loved his grandchildren, Cade, Gracie and Chase. Lin had a heart of gold and would give the shirt off his back if someone was in need.

Sisters:
Nell and Larry McBride of Pineland
Nita and Mike Adkison of Center

He was preceded in death by his parents, Jasper Sidney Marcantel and Doris Marie Cole Marcantel.

In lieu of flowers donations may be made in memory of Lin to the Pineland First Baptist Church Building Fund, P.O. BOX 216, Pineland, Texas 75968.