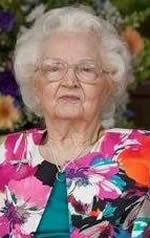 Leona Lawson, age 96, passed away September 7, 2021, at RollingBrook Rehabilitation and Healthcare Center in Baytown, Texas. She was born on February 21, 1925, in Runge, Texas to parents Emil and Mary Prasek Krauskopf. Leona moved to Crosby, Texas in 1941. Some years later, while working at Baker’s Grocery Store, she met the love of her life, Happy Lawson who was a RC Cola delivery man. Leona and Happy were married on August 4, 1952, in Crosby and were married for 52 years. She remained a resident of Crosby until Happy’s passing in 2005, then relocated to Baytown.

Leona’s greatest joys in life came from being with her husband, children, grandchildren and great-grandchildren. She loved being outdoors, cooking and baking, especially kolaches, sugar cookies, sand tarts at Christmas time and Rice Krispies Treats for the grandkids.

Leona was reunited with her parents, husband, three brothers, son-in-law, Johnny Parker, and other family members that have gone before her.

She leaves behind to cherish her memory:
Her daughters:
Mary Jane Parker
Carol Emanis and husband Dwayne

As well as numerous nieces, nephews and other family members

Leona’s family would like to thank all those who helped care for her over the years. In lieu of flowers, donations may be made to a charity of your choice.

In honoring Leona’s requests, a private family graveside service will be held at 2:00 PM on Friday, September 17, 2021, at Antioch Cemetery in Center, Texas

Services are under the direction of Sterline White Funeral Home.