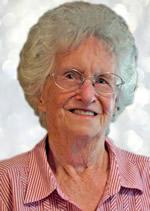 After a well-lived life of more than 94 years, Maxine Jernigan passed away peacefully at her home in Center on December 1, 2019 with her family by her side.

Visitation will be held from 4 to 7 p.m. Friday, December 6, 2019, at Watson & Sons Funeral Home in Center. The funeral service will be held at 11 a.m. on Saturday, December 7, 2019, at Watson & Sons Chapel with the Reverend Buddy Johnson and the Reverend Billy Jernigan officiating. Pallbearers will be grandsons. Interment will follow at Old Salem Cemetery. 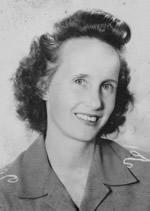 She was born Maxine McSwain on February 5, 1925 to Lee and Ethel Warr McSwain and grew up in the Salem Community where her family “never missed a service” at Old Salem Baptist Church. She graduated valedictorian of her 1942 class at Camp Worth High School.

She married Royce Johnson and was a young mother when he left to serve in World War II. As a farmer’s wife, she cooked meals for the hands, harvested gardens, milked cows, fed chickens, sewed clothes, scrubbed clothes on a washboard, ironed with a flat iron, fixed three family meals a day and raised four children. Somehow she also held a multitude of outside jobs through the decades.

Her most important job, however, was mother. She loved all her children and grandchildren unconditionally and they loved her in return.

She is survived by her sister Christine Mahan, brother Robert McSwain (Connie), sister-in-law Billie Hoyt and a host of nieces and nephews and cousins and friends.

She was preceded in death by her parents Lee and Ethel McSwain, her first husband Royce Johnson, her husband Bill Jernigan, her sisters Luna Waller and Janie Johnson and her brother Earl McSwain.

Always proud of her McSwain roots, she looked forward to family reunions and Old Salem homecomings. She was the oldest McSwain descendant of the four McSwain brothers who migrated to Shelby County from Alabama.

In her younger days, she took part in the Order of the Eastern Star and was a lifetime member of Center Chapter #348.

Her children started hosting annual birthdays for her in the 1990s and one of the most exciting days of her life was when more than 100 friends and family members gathered for a very special 90th birthday celebration in 2015.

She was an accomplished artist, doing scenic oil paintings plus country scenes on old plows and saws that are in many homes today. An excellent seamstress, she sewed for herself and her family for decades and made many heirloom quilts.

Well-known for her cooking, family members put together a book called “Maxine’s Cookbook: Tracing More Than Seven Decades of Home Cooking in East Texas” and she was famous for her tea cakes, fried okra, chicken and dumplings and rum cake.

She was a master of the English language, knowing all the rules for writing, spelling, and grammar, and she used those skills and her extensive vocabulary to become a formidable Scrabble player who, family members can attest, hated to lose.

In 1984, she married Bill Jernigan and they enjoyed almost ten years of cooking homegrown food and hosting holiday meals for their blended families before his death.

An accomplished gardener, her yard was always filled with beautiful flowers and her pantry had row after row of plum jelly, fig preserves and Nine Day Pickles. Her home was always surrounded by birds and she loved to watch flocks of redbirds and finches outside her kitchen windows.

Her last years were spent with a succession of canine companions that became part of the family: Spoon, Rascal, Little Bit, and Ginger loved her dearly.

Heartfelt thanks to Bonnie Nash, who spent many months with her so she could spend her last days in the comfort of her home.

Today we say good-bye to Mama, Mam-Ma, Mac, Aunt Mac, Mama Mac and Miss Maxine. Our lives are richer for having known her and we know that she will forever have a place in our hearts.

Memorial donations may be made to Old Salem Cemetery Fund, 8612 FM 711, Center, Texas 75935. Online condolences & tributes can be sent at www.watsonandsonsfuneralhome.com