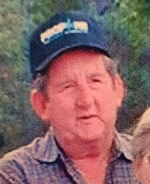 Milburn Wayne Cranford, 83, of Garrison, Texas, passed away on October 9, 2021, in Henderson, Texas. He was born on December 30, 1937, in Garrison, Texas to the late John David and Irene (Byrly) Cranford.  Funeral Service will be at 11:00 AM on Thursday, October 14, 2021, at Cold Springs Baptist Church, Garrison, Texas, with Bro. Blackie Cranford officiating.

Milburn “Mert” Cranford grew up in Garrison and was a truck driver for many years.

Mert was a great truck driver and worked hard for his family.  He always made sure his family was taken care of and had all they needed.  He enjoyed mowing his yard and keeping it looking nice.  He loved Sandra’s banana pudding and would request it often.  Mert’s family loved him very much and he will be greatly missed.

Milburn is survived by:
His wife, Barbara Hays Cranford

He is preceded in death by his parents, John David and Irene Cranford.

To send condolences and sign the online guest book you may go to www.garrisonfh.net

Garrison Funeral Home, Garrison, is in charge of arrangements.