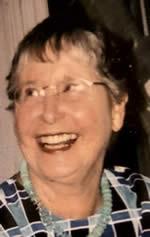 Peggy Julian Perkins of Timpson, Texas, passed away at age 92 on Sunday, January 5th, 2020, in Timpson, Texas. Peggy was born on April 28th, 1927, in Dubbery, Louisiana to the late John Calvin Julian and Louisa May (Schnurpel) Julian.

Peggy Julian Perkins was raised in Timpson, Texas, where she attended high school. After graduating from high school, she began her clerking career working at the Timpson train station at age 18. She then attended secretarial school in Houston, Texas, to further her career as a railroad rates clerk. While attending school there, she worked part-time at the soda stand in a pharmacy on Main Street Houston where she met the love of her life, Charles Morris Perkins. The two were married on February 23, 1951, spending more than 67 wonderful years together. While Peggy was an only child, she married into a family of ten brother- and sister-in-laws with numerous cousins, nieces and nephews which provided her with endless love, support and entertainment.

Peggy returned to work with the Southern Pacific Railroad in 1952 where she spent over 37 years as a rates clerk in Laffeyette Division of the Southern Pacific Railroad working in Port Arthur and Beaumont, Texas. Upon retirement Peggy enjoyed spending time with family and church members, as well as spending winters in South Texas with their many fellow ‘snow-bird’ Winter Texans from around the country. Peggy traveling with her husband extensively around the US and Canada visiting extended family members and their many friends. She enjoyed sharing fond memories from their many journeys.

Peggy was an active member of First United Methodist Church in Timpson where she and her husband were the first couple married in this church 69 years ago. She also hosted weekly bible study at her home.

A host of family and friends that will miss her dearly

She is preceded in death by her parents, John Calvin Julian and Louisa May (Schnurpel) Julian; her husband, Charles Morris Perkins; her son, Phillip Julian Perkins.

Memorial donations may be made to the Methodist Children’s Home, www.mch.org/donate/.

Taylor Funeral Home, Timpson, is in charge of arrangements. To send condolences and sign the online guest book you may go to www.taylorfh.net.