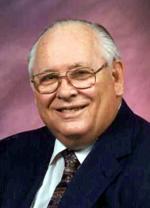 Bob was born in Beaumont, Texas, raised in Chester, Tyler County. Texas. After graduating from Chester High School in 1946, he attended the University of Texas in Austin where he obtained a Bachelor of Business Administration in 1951 and Bachelor of Law Degree in January 1954, however, he was licensed to practice Law in July 1953. He passed the Bar before graduation from Law School with authority to practice in all Texas State Courts, and later admitted to practice in the US District Court for the Eastern District of Texas, US Court of Appeals, 5th Circuit, and the US Supreme Court. He was a member of the Shelby County and American Bar Associations; State Bar of Texas; Fellow of the Texas Bar Foundation; Advocate, East Texas Chapter of American Board of Trial advocates; in 2003 he was honored by the State Bar of Texas for 50 years of service to the Bar. Bob entered retirement in 1994.

He was faithful to the Lord, serving as a Sunday School Teacher of The Fellowship Class for many years; Bob served as an active Deacon of First Baptist Church since 1979. He was President of Shelby County Chamber of Commerce, a member of The Texas House of Representatives from 1961 to 1963, President of the Shelby County Bar Association since 1973. Bob also helped organize Little League Baseball, along with others, in Center, Texas in 1954.

Bob is survived by:

A host of family and friends that will miss him dearly.

In lieu of flowers, donations should be made to your favorite charity in his honor.

To send condolences and sign the online guest book you may go to www.mangumfh.net.

Mangum Funeral Home, Center, is in charge of arrangements.