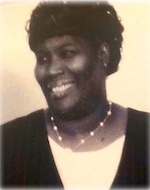 Robin Beatriz, 64, of Tenaha, Texas, departed this world on October 9, 2021. She was born on June 16, 1957, in Center, Texas, to the late Robert Bryan and Margie Adams. Her adopted parents were the late Mr. and Mrs. Willie Washington of Tenaha.

She attended Booker T. Washington elementary and later attended Tenaha ISD. She graduated in 1974 from Tenaha ISD at the age of 16. During her early years, she attended St. John Missionary Baptist Church in Tenaha and served as Sunday School sectary. She was employed as a cook at Lake Country Inn, Tenaha ISD, Excelsior ISD and Pine Grove Nursing Home. Mrs. Beatriz was also the manager of Tenaha Express and Whistle Stop. She worked at Fast Tax under the leadership of Mr. Howard Cloudy as a tax preparer until her health began to decline.

She loved her family very much.

Mrs. Beatriz leaves to cherish her:

A host of nephews, nieces cousins and special friends.

She also had two young men that called her mother - Christopher Caraway and Stacy Thompson.

The family of Robin Beatriz would like to convey their sincere thanks to all relatives, friends, and neighbors for their kind words of sympathy and generosity.

A Homecoming Celebration will be held at 11 a.m. on Friday, October 15, 2021, with Elder Fremon Bryant officiating at Jimerson-Lipsey Funeral Home Chapel, 1131 State Highway 149, Carthage, Texas. At the family’s request, face masks are required. Interment will follow at Friendship Bobo Cemetery in Bobo, Texas. A visitation will be held from 4-6 p.m. on Thursday and the funeral home.

A guestbook may be signed at www.jimerson-lipsey.com.