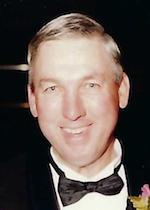 Sidney Van Lane, 79, formerly of Tenaha, Texas, passed away on August 1, 2022, in Spring Brach, Texas, surrounded by his loving family.

Sidney Van Lane was a common man born on April 26, 1943. Raised by Emmett and Yvonne Lane outside of Tenaha, Texas in the Tennessee community. A football, basketball and track star at Tenaha High School, he could always be seen in one Ford truck or another later in life. His uniform was the original shrink to fit Levi 501s and “snap shirts” from Walmart as he called them. The only time he left Shelby County was during his service in the US army first at Fort Polk then at Fort Hood from 1964 to 1966. He returned to Tenaha where he married and had one daughter, Stephanie Ann. Looking for a new direction, he started working with his best friend Skeet Rawson down at the mill. Most of you know him as a constant fixture at Tenaha milling where he loaded feed, put out fertilizer, and caught up with the local news and gossip in the community. When he wasn’t at the mill, he was feeding cows or baling hay. He was a creature of habit and had coffee and breakfast at the Tiger Stop every morning. Van was hard working and prided himself on never letting a day go to waste without getting something done.

A simple hardworking man that loved his daughter Stephanie, her husband Todd, and their kids Carly and Clay. He was meticulous about his one drawer in the desk at the mill with Tylenol, Tums and Neosporin (The cure all for any ailments according to Van.) His house was immaculate, and he was frustrated when we put trash in the “wrong hole” or turned on too many lights. Although he came from humble beginnings, Van was successful with his cattle and land but still lived a very simple life. A son, brother, father and grandfather, Van Lane was my Deddy. I will miss him and his steady unwavering support throughout my life. He always gave me sound advice like “you can’t be worried about that little stuff.” Words that most of us could live by in this crazy world.

Van passed away on August 1st at home with his family at his side.

He was preceded in death by his parents Yvonne and Emmett Lane, and brother Douglas Lane.

Van is survived by:

I hope he’s up there riding in a cab tractor with the A/C on high and the country top 40 count down playing on the radio. Love you with all my heart Deddy!

To send condolences or to sign an online register, please visit www.mangumfh.net. Mangum Funeral Home, Center, is in charge of arrangements.