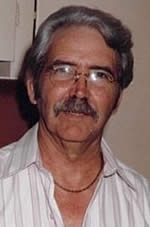 Bill was raised in Timpson and Nacogdoches. He joined the Army and served his country in the National Guard. He met the love of his life, Bobbi Wright, and the two were married. They raised their family in Nacogdoches. His passion for music led him to playing a steel guitar in a band most of his life. He was a welder by trade. Playing music, reading, and cooking on his pit were things he enjoyed doing later in life. He loved his kids, grandkids, and great-grandkids very much. They brought joy to him.