“The Football Donuts” by Doug Fincher

March 1, 2021 - Today was another sunny day in San Augustine, a perfect day to do much-needed things around our yard. But instead of working in the yard, we went to Nacogdoches and had my blood thickness checked. After a quick visit with the nurse, we drove to Staples and then to Wal-Mart. I decided to wait in the car while Pam went in and while I listened to Fox News, I began watching two ladies in the car parked next to me. Both of them were even more over-weight than I am and the number of chocolate-covered donuts they were consuming was just unbelievable.

After one lady choked down three of them, she stepped outside to smoke. In a few moments, she got back in the car and ate two more. About this time, Pam walked up and I began telling her what I had just witnessed. After a discussion about fattening foods and how thoughtless people are who eat them, we went back into the store to buy some low-calorie groceries. We bought lettuce, carrots, asparagus and some stir-and-fry things. As we approached the check-out, I spotted some beautiful bananas and asked Pam if she’d like to buy just one to divide on the way home. “Oh, a half banana won’t hurt us much,” she giggled as we loaded six large ones into the plastic bag. 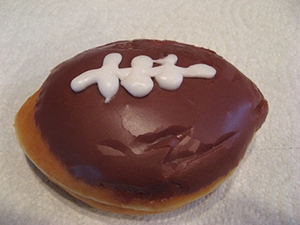 Suddenly she burst out, “Have you ever seen a chocolate covered doughnut shaped like a football?” And there they were scores of them, large, covered in heavy chocolate and decorated on top with a white-football-lace-shaped icing. We bought two of them and after eyeing a 4-pack of Blueberry Muffins, bought them, too.

While eating the doughnuts on the way home, Pam shouted, “Hey look! They’re cream filled!! This is just too much!” That night we ate a baked chicken breast, sliced cucumbers, and a huge Blueberry Muffin.

We’ve still got to lose the pounds we gained while on vacation and we have every intention of doing it ... just as soon as the bananas and muffins are gone.