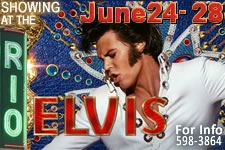 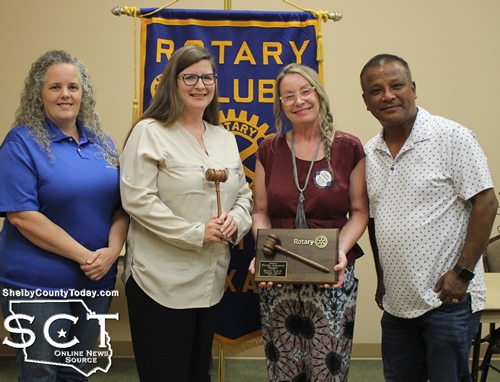 Prior to the swearing in ceremony J.J. Ford, Club Secretary, gave appreciation to the outgoing President, Faythe Abraham for her devotion to the club. “Faythe, just as your name implies, you have been faithful to the Center Rotary Club. Even though life took you a different direction, we greatly appreciate your time and devotion to finish out the remainder of your term as club president. Not only did you complete your commitment to our club, it was with fun as a key component. Traveling hundreds of miles didn't deter your enthusiasm for Service Above Self. We wish you the best in your future and know that you are always welcome in our club because you will forever be a part of our Rotary Family.” 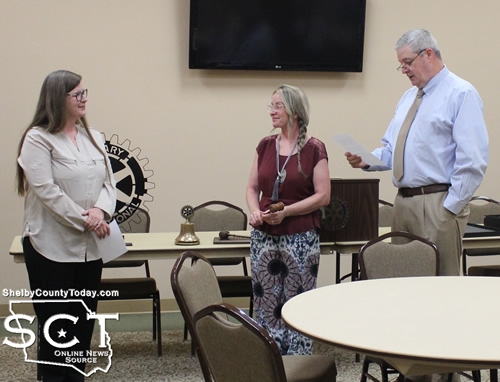 A plaque was then presented to Faythe for her 2021-2022 term as President.

Former Center Rotary Club member and meeting speaker, the 273rd Judicial District Judge Jim Payne assisted with the swearing in of Cancee Lester, “The role of President is the highest honor one can attain at the club level and you have earned the trust of your Board and club members to provide leadership to the Rotary Club of Center. It is a real privilege afforded to you.” After Lester recited her oath of office, now Past-President Abraham handed her the gavel. In her work life, Lester serves as the Director of Shelby County Operations for Panola College, a role she has held since July of 2017. She has been with the college since 2007 as an adjunct professor of psychology. The club is honored to have Lester as their leader for the 2022-2023 year. 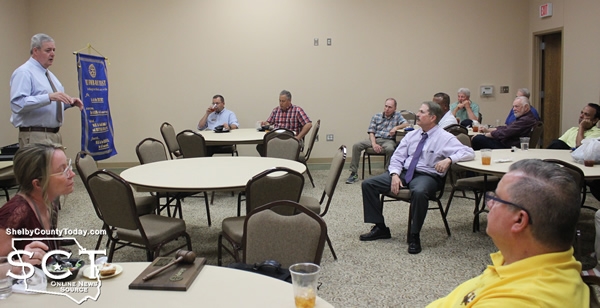 Judge Payne did highlight one of the main challenges the court system faces, which is jurors showing up for jury duty. “We need folks to show up for jury duty when summoned.” One of the Rotary members commented they thought it was a crime to not show up and the judge did say a fine could be imposed. Payne said he hasn’t fined anyone for not showing up and hopes he never has too; however, he really encourages anyone receiving a summons to please show up, “If you do get called, we need you. If your employee gets called, please send them up there, give them the opportunity to come and serve.” Judge Payne also advised serving on a jury may not be fun but it can definitely be interesting and enlightening and give insight into your community and what's happening.

According to Texas Government Code § 62.0141 (Failure to Answer Jury Summons), a person who receives a summons for jury service and fails to answer the summons as directed by the summons, is subject to a contempt action that is punishable by a fine of not less than $100 nor more than $1,000. 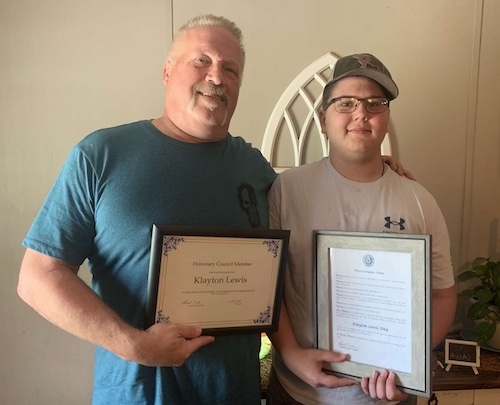 June 27, 2022 - The City of Joaquin recognized June 21, 2022 as Klayton Lewis Day. Klayton is a young man that lives in the Ramah Community and has courageously fought his battle with High Grade Glioblastoma.

Klayton loves playing football, he loves his family, fishing and his mommas cooking.

He's been sweet and brave throughout this battle. When he was in the children's hospital he said he wanted to carry all their sickness for them. His faith has stood as a strong tower since this has begun.
It is for these reasons and many others not listed, the Mayor and Council appointed Klayton as an Honorary City Council Member for the City of Joaquin.

Aaron King, Branch Manager, invites the community to come celebrate her many years of dedication to the banking industry. She has been at the Tenaha bank location for 30 years, serving previously with Citizen's State Bank until it was bought by First National Bank of Hughes Springs in 2014. She was head teller for many years before becoming a Loan Assistant which she have been for over half of her time.

Come visit with Mrs. Tatom on July 5th and congratulate her on her retirement! 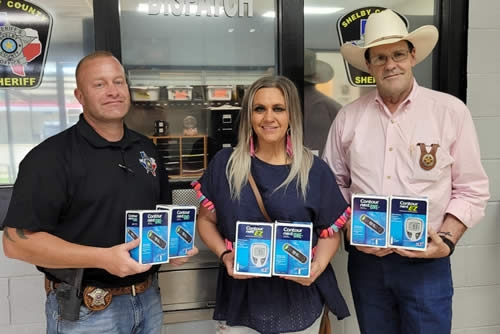 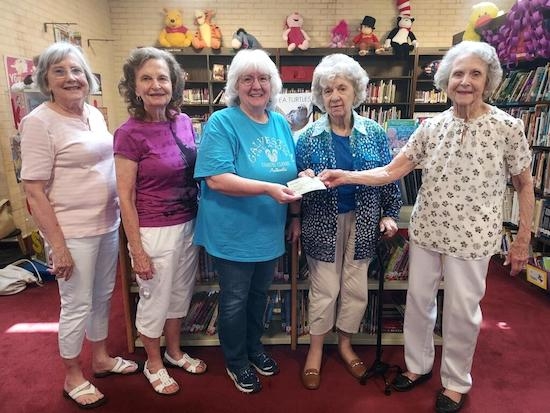 June 24, 2022 - The Center Woman’s Reading Club recently made a donation to the Fannie Brown Booth Memorial Library. Librarian Sandra Davis expressed her appreciation for the generous donation. She also shared with reading club members the many activities that are being offered at the library this summer for people of all ages. The library is currently decorated in an ocean theme which goes along with the programs being offered. The Center Woman’s Reading Club appreciates the many literacy opportunities the library provides for the community. Presenting the donation are Billie Sue Payne, Dottie West, Librarian Sandra Davis, Jane Ruth Morrison and Fannie Watson.

June 21, 2022 - Two students from Center were listed on the President's Honor Roll at Sam Houston State University in Huntsville, Texas. The students are undergraduates who have achieved a perfect 4.0 grade point average in all work attempted while enrolled in not less than 12 semester hours. The university would like to recognize the Katelyn Bolton and Kailen Randle for earning the honor for the Spring 2022 semester.

June 21, 2022 - Four students from Shelby County were listed on the Dean's List of Academic Honors at Sam Houston State University in Huntsville, Texas. The students are undergraduates who have achieved a grade point average of at least 3.5 out of a perfect 4.0 in all work attempted while enrolled in not less than 12 semester hours. The university recognizes the following students for earning the honor for the Spring 2022 semester.

June 20, 2022 - The Piney Woods Photographic Society held their June meeting this past Saturday at the FUMC in Center, Texas. There was an continuing lesson on post processing your photographs and also a workshop on photographing beautiful or unique reflections. Each month's workshop is a lesson on how to photograph next month's challenge. If either of these catch your interest, please feel free to attend our next meeting, the third Saturday in July. Visitors are alway welcome to attend.

PWPS is for camera enthusiasts of all skills and interests. Our goal is to help you become a better photographer and give you a place to meet others who share your passion for photography. Featuring programs and activities with information and instruction for all skill levels in an environment of support and cooperation.

The June challenge featured photographs showing "Motion Blur." Club members submitted 3 photographs using tips and techniques they learned from the previous month's workshop, for voting and discussions of how to better their photographic skills. To view all the challenge photos check out our Flickr page, https://www.flickr.com/groups/pineywoodsphotographic/. If you want to know more about the Piney Woods Photographic Society, "Like" us on Facebook. 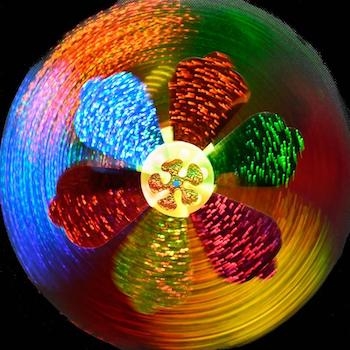 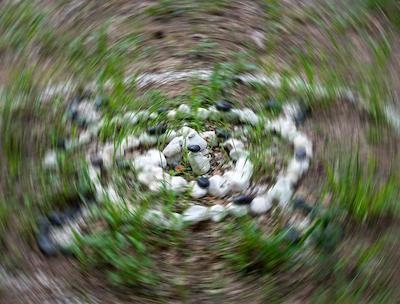 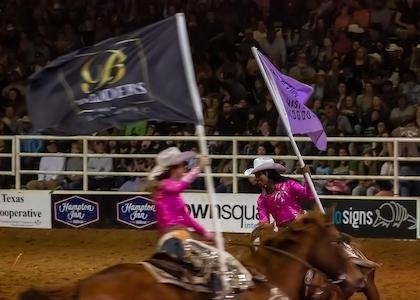 Paul Smith, who is the Timpson Area Chamber of Commerce President, expressed appreciation, “These two young ladies stepped up to help carry on a long lasting tradition that has been dormant for 13 years. I believe these two young ladies will represent Timpson with grace, hometown pride, and honor. They are very intelligent and confident young women and it was a pleasure being able to spend the morning with them.”

A huge from the chamber ‘Thanks’ goes out to all who helped and donated gifts for these two young ladies. 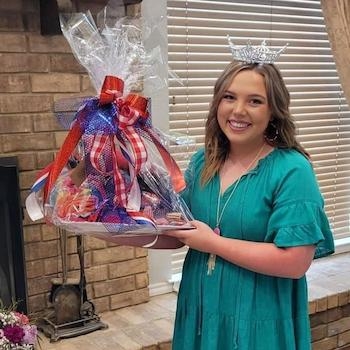 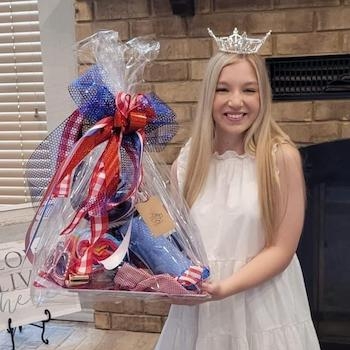 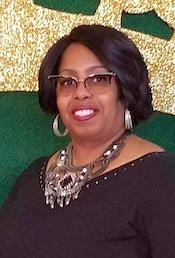 Ratcliff has spent over 38 years in the banking. She began her career First National Bank in Center, Texas where she was a dedicated employee for over four years. In 1988, Citizens Bank acquired First National Bank and Ratcliff became part of the Citizens Bank team. During her time in banking, she has served in various areas of operation including, Drive-Thru Teller, Loan Department Teller, Loan Assistant, New Accounts, and Banking Center Manager.

Ratcliff is a graduate of Panola College and Stratford University with a major in Business. Through the years she has continued her banking education by attending trainings and seminars.

She is also an active member of her community, serving on several boards and committees including the President of the Shelby County Chamber of Commerce, Shelby County Children Advocacy Board, Business and Professional Women, Center Emergency Planning, and a volunteer for the Center ISD Reading Program, just to name a few. She is currently serving on the board for Hope Community Medicine, the Shelby County Historical Society, and the Tri-County Community Action.

Ratcliff and her husband are active members of the St. Paul Missionary Baptist Church where she has served on the finance committee for several years. Together they have three children, Michael, Brandon (Teresa), and SeKourtney. She enjoys spending time with her family and especially her grandchildren, SeKeydric, Victoria, MarKovan, Karsyn, and Jeremiah.

About Citizens Bank
Citizens Bank is a $470,000,000 independent community bank headquartered in Kilgore, Texas. Charted in 1949, Citizens Bank has 12 conveniently located Banking Centers in Texas: Bryan-College Station, Carthage, Center, Gladewater, Humble, Kilgore (2), Kountze, Sour Lake, The Woodlands, Yorktown, and a LPO/DPO in Plano. Member FDIC, Equal Housing Lender. If you would like more information or have any questions about Citizens Bank, please call 903.987.8671 or visit our website at citizensbanktx.com.