Our snack bar will be open to the public at 5pm before and during the lighted Christmas parade on the square.
Mike & Nita Adkison

Thank You Letter from the Kenny Walker Family

November 7, 2022 - The Walker family would like to thank our family, friends, co-workers, and community for the outpouring of love and prayers during this very difficult time in our lives.

Our hearts are overwhelmed and words cannot truly express our appreciation for all the prayers, visits, texts, calls, cards, food, and love shown to us through this time.

Special thank you to Josh Tipton, Taylor Fanguy, and Billy Lusk for the hard job you had and the compassion you showed. Thank you Bro. Fred Wilcox and Bro. Eric Pledger for praying with our family as we received the news.

Thank you also to the Hemphill Class of 1979 and BACA for your support and assistance with Kenny's service, we are truly grateful.

We appreciate the donations we have received for the Kenny Walker Memorial Scholarship. We hope to help make a difference in the lives of Timpson ISD students in their educational future.

A FREE dinner will be provided and lots of great door prizes.

50 seats available for attendance by R.S.V.P only!

November 1, 2022 - K9 Nyx was very excited to assist Officer Brian Wright in drawing for the winning ticket of our Gun raffle. Congratulations Marla Denby in winning the Ruger 300 Blackout. 255 of the 300 tickets were sold.

Thank you to everyone who purchased a ticket, or gave a donation in support of the future K9 for Center Police Department. 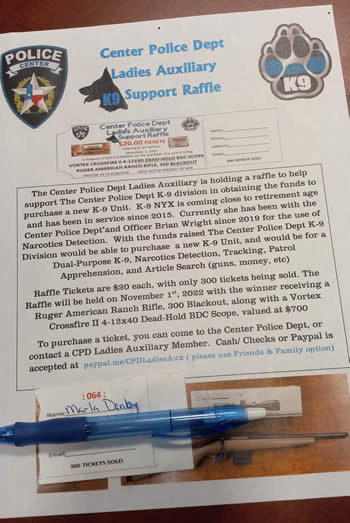 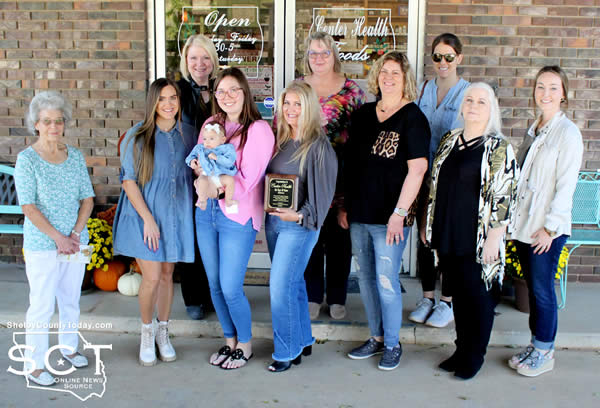 October 28, 2022 - Center Health and Harmony celebrated its 10th Anniversary with members of the community and the Shelby County Chamber of Commerce Ambassadors Friday, October 21.

Deborah Chadwick, Shelby County Chamber of Commerce President, congratulated businesses owner Beth Brown on behalf of the Chamber of Commerce and presented her a 10th Anniversary plaque. Brown said she appreciated everyone attending the event and for their support. 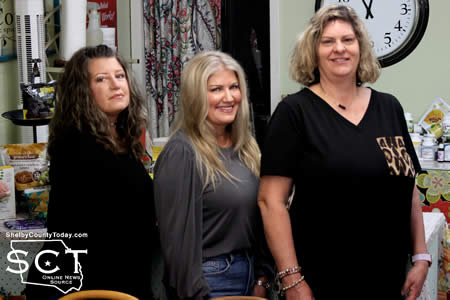 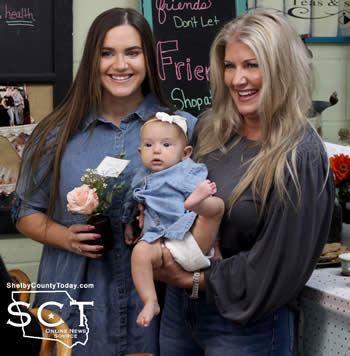 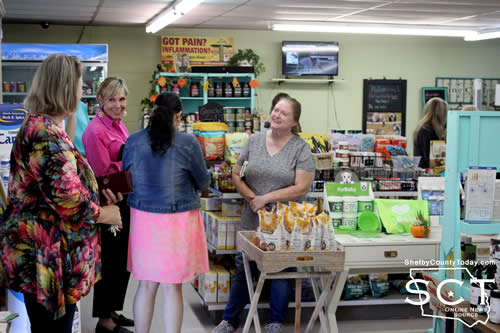 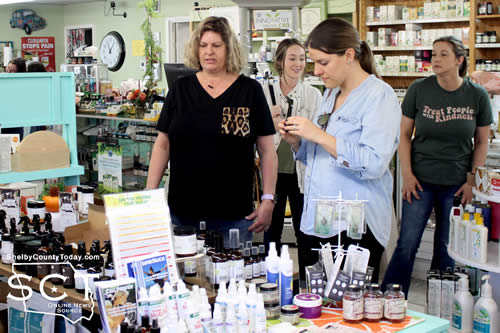 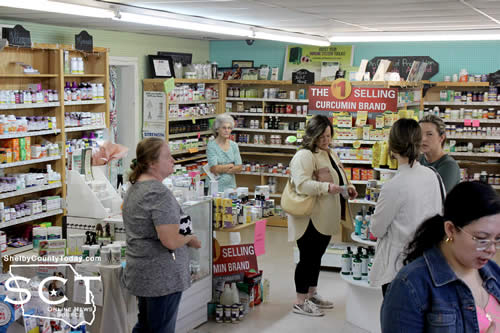 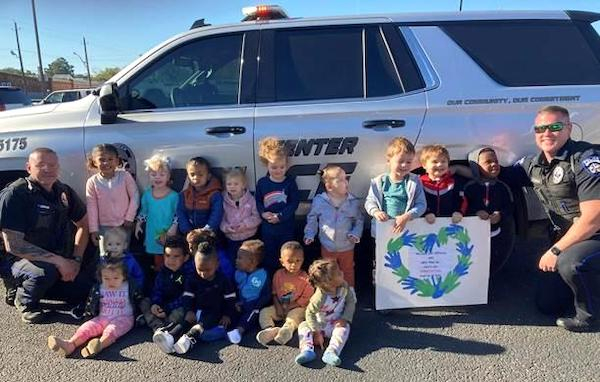 October 27, 2022 - Center PD K9 Officer Brian Wright, K9 Nyx, and Patrol Officer Michael Davidson went to visit the kids at Center Learning Academy on Thursday, October 27th. Our new friends got to turn on the lights in the new police car, climb in the back seat and talk on the radio!

The Center Police Department would like to thank Center Learning Academy for the invite and for helping us teach our little friends that Police are our friends and keep us safe. 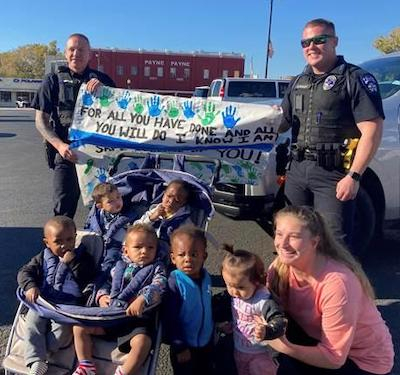 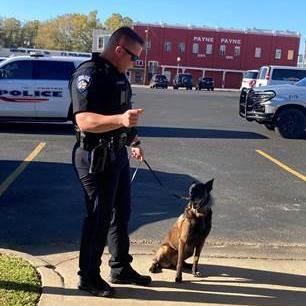 October 26, 2022 - VFW Post 8904 and Auxiliary members gathered at the Shelby County Veterans Memorial to honor Women in the Military on October 18, 2022.

The program was led by Larry Hume, Post Quartermaster, and the invocation was given by Mike Wulf, Post Member.

Hume stated, the history of women in the armed forces began more than 225 years ago with women who served in the American Revolution and it continues today. 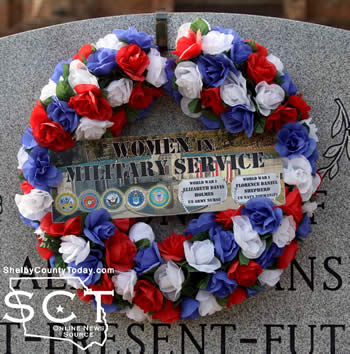 "The women we honor today are a remarkable bunch," said Hume. "When you think of it, the Revolutionary and Civil War women wanted to serve so badly that they disguised themselves as men."

In 1917 when women were without the right to vote, Hume explained, nurses answered the call to duty in World War I.

"They served everywhere, including near the front lines in France," said Hume. "Not only were their hours long and tedious caring for the wounded and the maimed, but they also had to deal with the 1918 flu epidemic that killed millions worldwide, and many of the nurses themselves."

Once again answering the call to duty during World War II, when the armed services opened their ranks to women, freeing up more men for battle.

"Seventy-seven nurses in the Pacific were taken as Japanese prisoners of war," said Hume. "At Anzio, Italy six Army nurses died from German bombardments. Forwarding to the mud of Korea, 70% of the Army nurses served in Mobile Army Service Hospitals, better known as M.A.S.H. units and 7,500 women served in southeast Asia during the Vietnam War."

Army Nurse Lt. Sharon Lane, 25, was killed during a rocket attack at Chu Lai, Vietnam and seven others died in the Vietnam war due to accidents and illness. 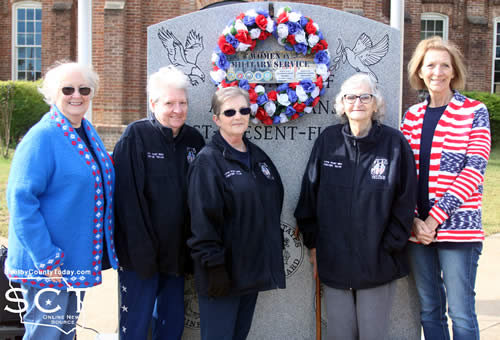 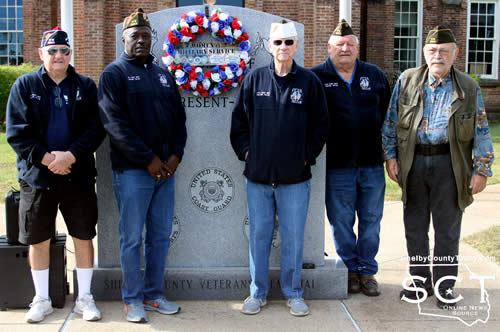 "In 1990, 40,000 American women deployed for Operation Desert Shield and Desert Storm, and according to the U.S.O. more than 300,000 women have served during the post-9/11 war including Enduring Freedom and Iraqi Freedom," said Hume.

More than 9,000 have earned the Combat Action Badge and 16% of our nations forces are made up of women. 15 have lost their lives in Iraq and Afghanistan.

"Today women command Navy vessels, they command combat units, they wear General and Admiral stars, they fly fighter bombers you name it, and we thank them all today," said Hume. 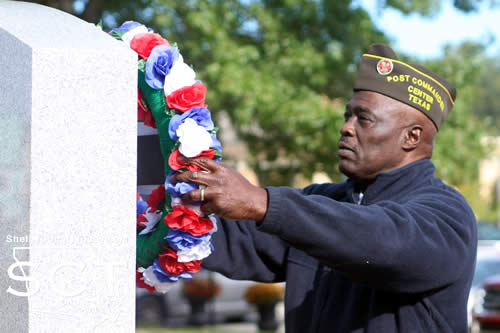 Post Commander Richard Lundie then placed a memorial wreath in honor of women in the military. Taps was then played as presented by Gene Hutto, Past Post Commander. 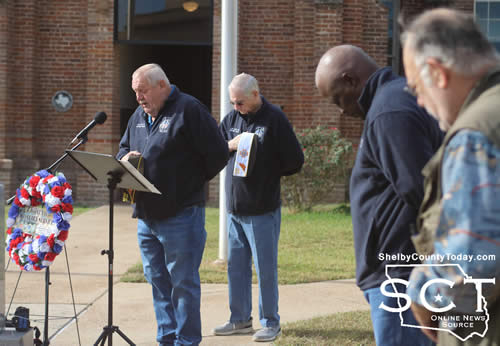 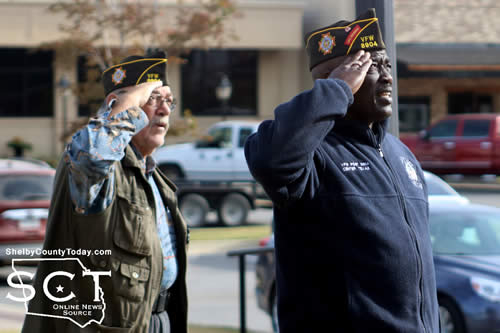 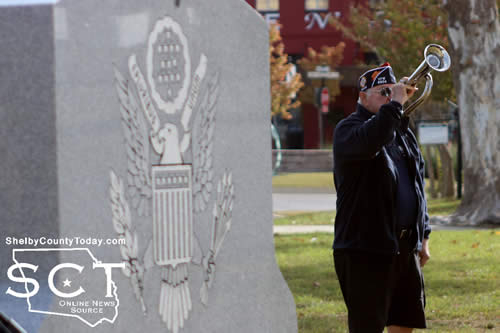 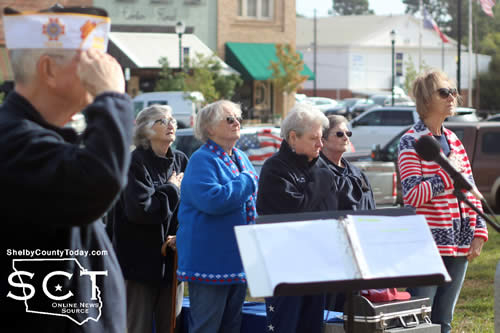 October 25, 2022 - The Piney Woods Photographic Society its regular monthly meeting Saturday, October 15, 2022. There was a workshop presentation on "Perspective" in photography in preparation for the November Challenge. Challenge photos featured any photograph shot with a large aperture setting with the subject of their choice. After voting for their favorites by members and technique discussions the Favorites for the month of October are: 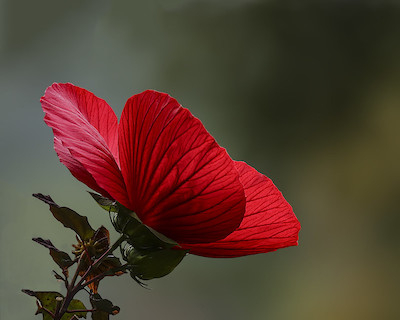 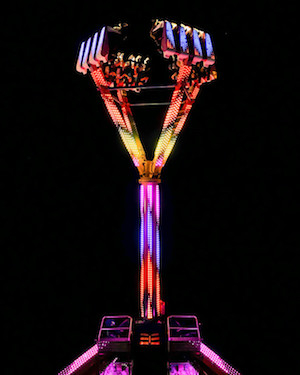 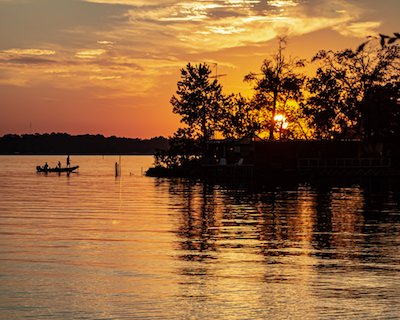 It's Back - Excelsior PTO Halloween Carnival 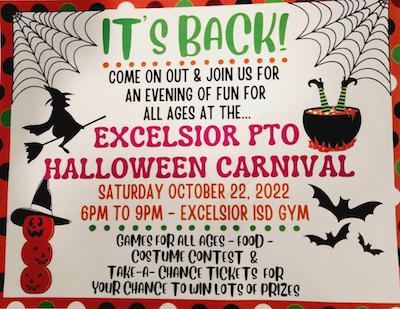 October 17, 2022 - The Excelsior PTO Halloween Carnival is back! Come out for an evening of fun for all ages on Saturday, October 22, 2022 from 6pm until 9pm at the Excelsior ISD Gym.

There will be games for all ages, food, costume contest and take-a-chance tickets for your chance to win lots of prizes. 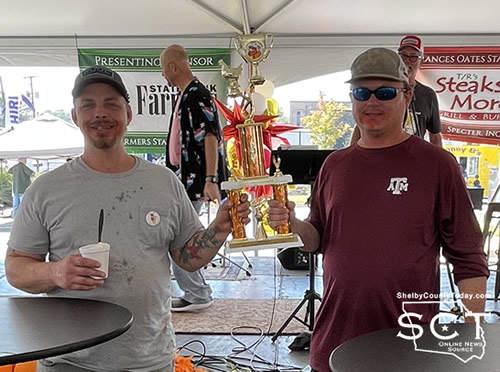 October 13, 2022 (Photo Album) - Eight contestants were brave enough to step up to the plate at high noon on October 8 in the “Wing It” contest sponsored by McWilliams and Sons at the 46th Annual East Texas Poultry Festival.

Rose Specter with T/R’s Steaks and More and Endless Possibilities was over the wings and when two of the contestants passed the Carolina Reaper heat level the contest had to end in a tie for the first time in its history.

Allen Nestle from Center, Texas and Weston Boyd from Georgetown, Texas both took the heat to win 1st place in the hottest contest of the festival! 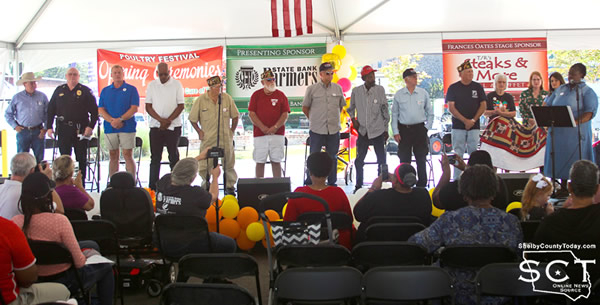 Presenting the quilts were AgriLife County Extension Agent - Family and Community Health Feleshia Thompson; AgriLife District 5 Extension Program Specialist Jheri-Lynn McSwain; and Shelby Sewcial Bee representatives, Michele Clark and Margaret Smith. They each took turns introducing the quilt recipients and wrapping the veterans with a ceremonial quilts. The quilts each veteran takes home were on display during the festival.

McSwain provided additional background into the development of the Quilts of Valor program, "In 2003 a quilter named Katherine Roberts started the movement that became the Quilts of Valor when her son was deployed to Iraq. Since that time over 190,000 Quilts of Valor have been awarded across the United States. Our mission is to honor service members and veterans who have been touched by war in service with comforting and healing Quilts of Valor. We will be presenting 10 quilts today which have been sponsored by the Center Noon Lion's Club and local individuals."

Each honoree was then announced and their service was recognized. As the ceremonial quilt was placed on their shoulders, they were welcomed home and thanked for their service.