January 27, 2022 - Property Taxes are due Monday, January 31st to the county tax assessor-collector, Debora Riley. If you wait until February 1st, a penalty and interest of 7% will be charged for unpaid tax bills. In March the penalty and interest increases to 9% and continues to increase an additional 2% each month.

The courthouse is open until 4:30pm Monday through Friday.

INNOVA is Latin for ‘Renew’

January 26, 2022 - The Center Economic Development Corporation is seeking applications from businesses within the city that want to improve the appeal or make updates to their properties.

The INNOVA Grant seeks to provide financial assistance to any Center business located in downtown, a commercial or industrial zone. The program will reimburse the applicant 50% of qualifying improvements up to a certain dollar amount.

January 25, 2022 - According to the Texas Department of State Health Service’s Covid-19 Dashboard, since yesterday there have been 12 total new cases of Covid-19 reported. Of the new cases reported, 9 are new confirmed cases and 3 are new probable cases.

Today’s increase is the smallest increase in new cases reported in over a week.

No new Covid-19 deaths were reported over night.

January 25, 2022 - Roscoe McSwain, Commissioner Precinct 1, announces County Roady 1246 will be closed in the middle for culvert replacement until work is complete.

January 24, 2022 — The Internal Revenue Service today kicked off the 2022 tax filing season with an urgent reminder to taxpayers to take extra precautions this year to file an accurate tax return electronically to help speed refunds.

The start of this year's tax season – which takes place earlier than last year's February 12 opening – signals the IRS is now accepting and processing 2021 tax returns. More than 160 million individual tax returns for the 2021 tax year are expected to be filed, with most before the April 18 tax deadline.

Most taxpayers face an April 18 deadline this year due to the Emancipation Day holiday in Washington, DC falling on April 15. Taxpayers in Massachusetts and Maine will have an April 19 deadline due to Patriots Day; disaster victims have later filing deadlines in some locations.

IRS Commissioner Chuck Rettig noted that taxpayers need to take special care this year due to several critical tax law changes that took place in 2021 and ongoing challenges related to the pandemic.

"IRS employees are working hard to deliver a successful 2022 tax season while facing enormous challenges related to the pandemic," Rettig said. "There are important steps people can take to ensure they avoid processing delays and get their tax refund as quickly as possible. We urge people to carefully review their taxes for accuracy before filing. And they should file electronically with direct deposit if at all possible; filing a paper tax return this year means an extended refund delay."

For most taxpayers who file a tax return with no issues, the IRS anticipates they will receive their refund within 21 days of when they file electronically if they choose direct deposit – similar to previous years. Last year's average tax refund was more than $2,800.

"There are simple steps that people can take that will help them navigate this challenging tax season," Rettig said. "Filing electronically and using online resources instead of calling are just some of the steps that can help people avoid delays."

"IRS employees will do everything possible with the available resources to serve taxpayers this year," Rettig said. "We will work hard to deliver refunds quickly, serve as many people as possible and work to catch up on past tax returns affected by the pandemic. The IRS thanks you for filing your taxes, a critical part of helping our great nation."

January 24, 2022 - According to the Texas Department of State Health Service’s Covid-19 Dashboard, since Friday there have been 142 total new cases of Covid-19 reported. Of the new cases reported over the weekend and Monday, 62 are new confirmed cases and 80 are new probable cases.

With the continued surge of Covid-19 cases, some businesses are once again encouraging masks be worn inside their locations. According to healthcare professionals, best practices for preventing the spread of Covid-19 continues to be good hand washing practices, cleaning and disinfecting, good ventilation inside buildings, wearing masks when indoors especially in large crowds or groups, and practice social distancing. If you are sick, stay home or if you have syptoms develop while out and about, go home.

No new Covid-19 deaths were reported over the weekend.

January 24, 2022 - The voter registration deadline for the March 1st Primary elections (Democrat and Republican) is just around the corner. January 31st is your last chance to update your address or register to vote. Make sure you’re all set to cast your ballot on March 1st. Make sure your voice is heard. Click here to visit votetexas.org to register to vote, confirm your voter registration status, update your address.

January 21, 2022 - One week ago the Texas Department of State Health Services announced an update to the Covid-19 Dashboard and a move away from reporting estimated number of active cases and estimate number of recoveries. Since then, the dashboard is only reporting the total number of cases and fatalities.

The number of confirmed cases and probable cases changed drastically after the update as the state was revising case totals to account for final 2020 case numbers. According to the press release, year-end data cleanup is a standard part of public health reporting.

The numbers published after the update and just prior to the update were as follows:

The change moved an unknown number of cases from Probable to Confirmed. The difference between Confirmed and Probable cases is the type of test given. Confirmed cases are a person who has tested positive through a molecular test that looks for the virus’s genetic material. Probable cases are a person who has either tested positive through an antigen test or has a combination of symptoms and a known exposure to someone with COVID-19 without a more likely diagnosis.

For the week, since January 14th, a total of 251 new cases were reported and 2 new deaths.

Expanded demographic data to be available

January 14, 2022 Press Release - With Friday’s update to the Texas COVID-19 data dashboard, the Texas Department of State Health Services is revising case totals to account for final 2020 case numbers. DSHS reported a total of 1,620,499 confirmed and 182,983 probable cases to the Centers for Disease Control and Prevention for 2020. As of today, statewide and county numbers will be adjusted to reflect those final totals. The dashboard will be down for a period of time Friday afternoon as the updates are made.

Year-end data cleanup is a standard part of public health reporting. Epidemiologists review case information to weed out cases that may have been reported multiple times or by different jurisdictions, identify cases that may have been missed, verify cases are assigned to the right county, and ensure cases are classified correctly as either confirmed or probable. Any errors are corrected, and the result is the most accurate accounting of disease cases possible. Until the finalization process is complete and data reported to the CDC, all public health data is considered provisional and subject to change.

DSHS is also making dashboard improvements, including allowing users to filter by year and enhancing the demographic information available. Data that shows disease cases by sex, age and race/ethnicity will include all Texas cases reported into the National Electronic Disease Surveillance System. Until now, demographic data has only been available for a small subset of cases. Users will also be able to view monthly demographics for COVID-19 cases and deaths, and a future update will add rate calculations. DSHS is removing the estimates of active and recovered cases because of the difficulty of assigning them to a specific year.

The final 2020 data increases the total number of confirmed and probable Texas cases by about one-half of one percent. Individual counties may see larger changes. Most are due to a combination of de-duplicating cases reported multiple times, correcting the county of residence, or correcting the classification of the case, for example, when a person who was initially a probable case got additional testing and became a confirmed case.

DSHS will continue to update the dashboard daily with the latest available information and make improvements in data collection and display over time. 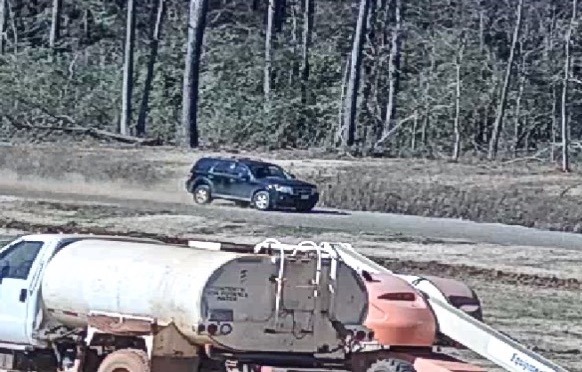 This is a picture of the vehicle believed to be driven by the suspect(s) and it is believed to be a black 2008-2011 Ford Escape. The suspects should be considered armed and dangerous, and should not be approached.

At the scene, Deputies, along with San Augustine Police City Officers found that Courtney Garrett had been shot during a home invasion by two unknown black males. Mr. Garrett was transported to the emergency room in San Augustine, where he was then transported to LSU trauma center in Shreveport Louisiana by life flight.

The Sheriff’s Department is investigating the incident and is currently following up on leads to identify the suspects. Anyone with any information on this case is asked to contact Sheriff’s Investigator Joey Haley at the San Augustine Sheriff’s Office at 936-275 2424. 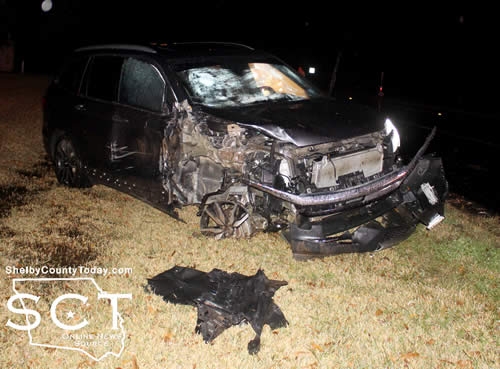 According to Texas Department of Public Safety State Trooper David Shields, at around 6:20pm a silver 2015 Mazda CX-5 SUV driven by a 59-year-old female driver was westbound on SH7 East at an unsafe speed during wet roadway conditions and heavy rain and veered over into the eastbound lane striking head-on a grey 2019 Honda Pilot SUV which was eastbound. 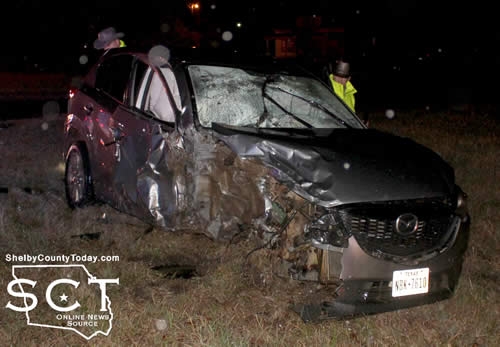 Center Fire Department and Shelby County Sheriff's Department personnel assisted at the scene with traffic control until the roadway was clear.

Additional identifying information on the driver's was not yet available at the time of this report.