Updated 4:28pm: The Texas DSHS Covid-19 Dashboard updated at 2:50pm today and the number of active cases increased to 157. The dashboard gave the following disclaimer as to why the data hasn't been updated since December 30th.

"The case counts for Dec. 31 – Jan. 4 include backlogged lab reports from last week (12/27 – 12/31). Due to the rapid increase in COVID-19 lab tests, the system that processes electronic lab reports and identifies new cases was running slower for three days last week. DSHS identified ways to streamline the algorithm that identifies new cases, which dramatically improved the system’s processing speed. The system will finish processing all lab reports older than one day on Tuesday, Jan. 4."

DSHS hasn't updated the Covid-19 dashboard since December 30. The Shelby County numbers for the year 2021 are from January 1, 2021 to December 30, 2021. In total (confirmed cases and probable cases), there were 2,014 new cases of Covid-19 reported. There were 74 new deaths reported which is equal to a new death every 4.9 days. *The deadliest months of 2021 were February, August, and September which were all double digits. The lowest number of reported cases were in November (31 cases) and March (33 cases).

In the month of December, the DSHS dashboard reported 117 new cases, 1 new death, and 39 new recoveries.

Shelby County Grand Jury Indictments Include One for Murder

Justin Earl Bennett was indicted for murder, first degree felony. The indictment alleges, on August 21, 2021, Bennett intentionally or knowingly caused the death of Deon Bailey by shooting him with a gun in the head and thigh.

Zenas Montre Whitaker was indicted for aggravated kidnapping, first degree felony. The indictment alleges, on July 7, 2020, Whitaker abducted an individual by moving her from one place to another while also exhibiting a deadly weapon, a bat.

Philip Taylor Reynolds was indicted for medicaid fraud, third degree felony. The indictment alleges, on January 9, 2014, Reynolds falsely claimed to provide dental services to permit him to receive payment under a health care program, namely Texas Medical Assistance Program, and the payment was greater than the benefit that was authorized. The amount of the payment provided under the health care program, directly or indirectly, as a result of the alleged conduct was $30,000 or more but less than $150,000.

David Morgan Creel was indicted for abandoning or endangering a child, second degree felony. The indictment alleges, on September 6, 2021, Creel engaged in conduct that placed a child younger than 15 years of age in imminent danger of death, bodily injury, or physical or mental impairment by forcing the child into deep water knowing they could not swim.

Corey Green was indicted for credit card/debit card abuse, state jail felony. The indictment alleges, on June 21, 2021, Green had intent to fraudulently obtain a benefit through use of a credit card, namely a Timpson Quick Stop fuel card, with knowledge the card was not issued to Green. It is further alleged the use of the card was not with the effective consent of the cardholder, Timpson Volunteer Fire Department.

Terry Jay Hunsley was indicted for indecency with a child, second degree felony. The indictment alleges, on February 4, 2019, Hunsley had intent to arouse or gratify sexual desires and caused a child younger than 17 years of age to engage in sexual contact.

(Dates in parenthesis indicate the date of the alleged incident):

Indictments and Information are not a conviction, and are a matter of public record. All individuals are presumed innocent until found guilty in a court of law.

Day One: Today and Tonight

Thunderstorms will be possible across the I-30 corridor into south-central Arkansas later this morning into early this evening. Some severe storms may be possible producing hail, damaging winds, and isolated tornadoes.

Another round of severe weather will be possible from Friday evening into Saturday mainly across the I-30 corridor into south-central Arkansas and north Louisiana along a frontal boundary. Conditions forecast to improve on Saturday afternoon with much colder temperatures expected. Overnight lows on Sunday morning forecast to range from the teens across southeast Oklahoma to near freezing across north Louisiana.

Activation of emergency management personnel, amateur radio operators, and storm spotters will not be needed today or tonight. 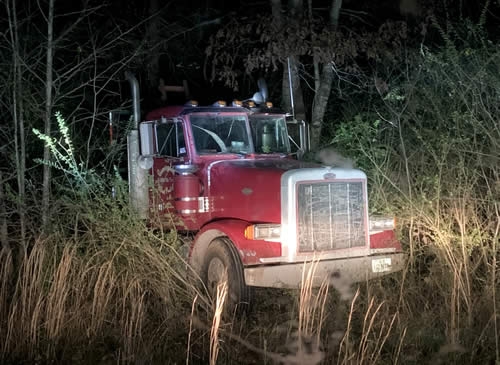 December 28, 2021 - Shelby County Constables were successful in locating and recovering a stolen truck-tractor on December 27, 2021.

According to Josh Tipton, Constable Precinct 5, during the early evening he received a call of a disturbance involving an unwanted individual at a residence, and once at the location he obtained information the man was a Johnny Cunningham of Spurger.

Witnesses at the residence provided information to Constable Tipton, Cunningham may have stolen a vehicle as a means to get to Timpson; however, he was without a vehicle and was on foot.

As the result of continued investigation and while on routine patrol Constable Tipton eventually discovered Cunningham walking along U.S. Highway 59 in Timpson and he made contact with him. During questioning of Cunningham beside the roadway Roy Cheatwood, Constable Precinct 3, arrived to assist. 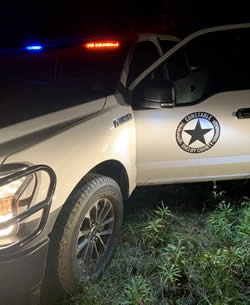 From there the constables determined the location of a 1996 Peterbilt 378 off County Road 4849 on a gas pipeline right of way backed up into some brush. During the constables investigation they confirmed with Tyler County the truck had been reported stolen.

Information and evidence gathered during the investigation is being passed on to the Tyler County Sheriff's Department for potential warrants to be issued at a later date.

The truck was able to be returned to its owner as a result of this investigation.

December 28, 2021 - The boil water notice for San Augustine Rural Public Water System has been rescinded. It is no longer necessary to boil water.

December 22, 2021 - Due to a break in a line, the Texas Commission on Environmental Quality (TCEQ) has required San Augustine Rural Public Water System PWS #2030007 to notify Customers on FM 353 to boil their water prior to consumption (eg., washing hands / face, brushing teeth, drinking, etc). Children, Seniors and Persons with weakened immune systems are particularly vulnerable to harmful bacteria, and all customers should follow these directions.

To ensure destruction of all harmful bacteria and other microbes, water for drinking, cooking and ice making should be boiled and cooled prior to use for drinking water or human consumption purposes. The water should be brought to a vigorous rolling boil and then boiled for two minutes.

In lieu of boiling, individuals may purchase bottled water or obtain water from some other suitable source for drinking water or human consumption purposes.

When it is no longer necessary to boil the water, the public water system officials will notify customers that the water is safe for drinking water or human consumption purposes.

Please share this information with all the other people who drink this water, especially those who may not have received the notice directly (for example, people in apartments, nursing homes, schools, and businesses). You can do this by posting this notice in a public place or distributing copies by hand or mail.

December 28, 2021 - The federal government controls the distribution of monoclonal antibodies, and the regional infusion centers in Austin, El Paso, Fort Worth, San Antonio and The Woodlands have exhausted their supply of sotrovimab, the monoclonal antibody effective against the COVID-19 Omicron variant, due to the national shortage from the federal government. They will not be able to offer it until federal authorities ship additional courses of sotrovimab to Texas in January. People who had appointments scheduled this week will be contacted directly and advised. Other monoclonal antibodies have not shown to be effective against the Omicron variant, which now accounts for more than 90 percent of new cases. The infusion centers will continue to offer those antibodies as prescribed by health care providers for people diagnosed with a non-Omicron case of COVID-19.

Two new oral antiviral drugs authorized last week by the Food and Drug Administration will be available soon, though they are expected to have a limited initial supply, and the federal government will also control their distribution. People with COVID-19 infections at high risk of hospitalization and death should contact their health care provider to discuss treatment options. Everyone should protect themselves from severe COVID-19 by getting vaccinated as soon as possible, getting a booster as soon as they are eligible, and continuing to take precautions to prevent being exposed to the virus that causes COVID-19 and spreading it to others. 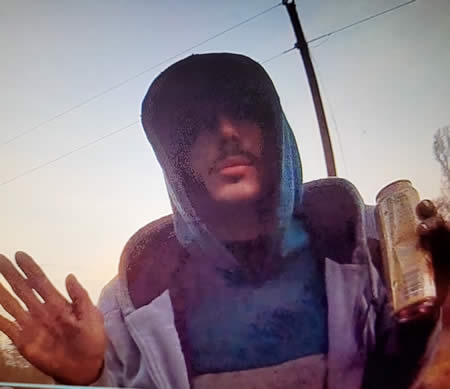 December 23, 2021 - Sheriff Kevin W. Windham reports that on Thursday, December 23, 2021 at 6:45am, an officer with the SCSO responded to a suspicious vehicle call at the intersection of FM 417 and FM 2694 in Shelbyville. Upon arrival, the officer made contact with an individual known to be Gary Smith, 19, of Timpson. Smith was known to have an active warrant out of San Augustine County for Assault (M-A). When the officer attempted to arrest Smith, he crossed a fence and took off on foot. Smith was last seen heading South in a pasture off FM 417.

He is described as a white male, 6-foot, and weighs approximately 145 pounds with brown eyes and brown curly hair. He was last seen wearing a gray jacket with a blue hoodie underneath it, blue jeans and a baseball cap. Smith’s clothes were very dirty.

If anyone is found to be hindering the apprehension, harboring or concealing, providing or aiding with any means of avoiding arrest or effecting escape, or warns Smith of impending discovery or apprehension, will be arrested and charged in accordance to Penal Code 38.05 Hindering Apprehension or Prosecution, a Felony 3 offense. 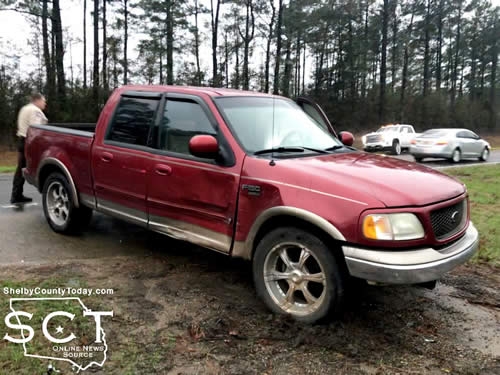 According to Texas Department of Public Safety State Trooper Keith Jones, at 4:43pm a red 2003 Ford F-150 driven by Colton Lee McSwain, 25, of Timpson was northbound on SH 87 near CR 1034 during rain conditions when three dogs were crossing the road.

McSwain applied breaks in an attempt to avoid striking the dogs when he lost control and the vehicle swung around and while traveling backwards the passenger side of the truck struck the driver's side of a 2020 GMC Terrain driven by Margaret Bush, 66, of Center. 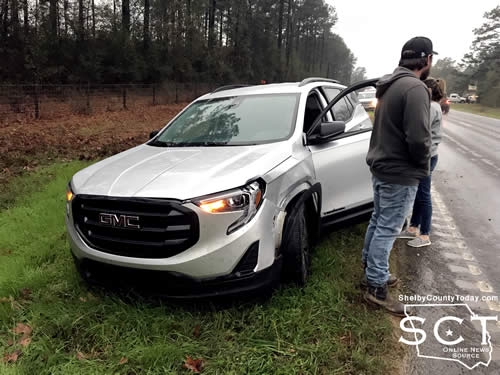 No injuries were reported as a result of the crash.

McSwain was issued a citation for wrong side of roadway not passing.

December 22, 2021 - State Highway 7 West was the scene of a two-vehicle hit-and-run crash which resulted in injury to two people involved.

At that time an unknown driver of a white Chevrolet pickup truck attempted to pass on the left.The truck failed to maintain a single lane and struck the Silverado pickup truck causing Diez to leave the roadway to the right, travel over a culvert, overturn and roll through a fence before coming to rest on its top.

The white Chevrolet veered left and traveled off the roadway to the left where it crossed over two culverts and re-entered the roadway before fleeing the scene of the crash.

This crash remained under investigation.