June 25, 2020 - Shelby County Emergency Management reports there have been 31 new cases reported in the last 10 day period. This spike is due, in part to DSHS reporting that 11 of these cases were from Tyson. DSHS also has reported 9 new cases at Focused Care Nursing Center during this same 10 day time period. The outbreak at Focused Care has a total of 21 confirmed cases but 6 of those have been reported as recovered. Leaving 15 active cases at the facility. DSHS has not reported any hospitalizations to us from the outbreak at Focused Care.

For today's report, the Shelby County Emergency Management office reports as of 9:30am on Thursday, June 25, 2020, TxDSHS has reported 3 new cases for a total of 261 cumulative cases of COVID-19. DSHS reports 5 more recoveries for a total of 146 recoveries leaving 107 active cases.

DSHS also reports of the 261 cumulative cases, 18 of those cases are "lost to follow" which means DSHS has not been able to contact them to follow up on their recovery. 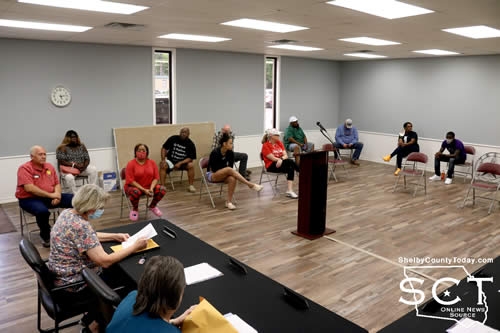 The most recent Tenaha City Council meeting held Monday, June 22, 2020 was well attended with just over 30 people in the room at one time.

June 24, 2020 - The Tenaha City Council has voted to close down the city offices once again due to two city employees potentially having COVID-19.

Test results are not expected to be back until Friday, June 26, 2020. Durand Steadman, councilman, suggested shutting the doors until mid-July or the end of July.

The meeting was held over telephone conference at 6pm Wednesday, June 24 and Amanda Treat, City Secretary, stated she and the Municipal Court Judge became ill Tuesday with the same symptoms and have both been tested for COVID-19.

What safety measures to take at the city office during the COVID-19 staff testing and afterwards were up for consideration on the agenda.

"We're going to lock the doors again, and keep them locked, we don't want nobody coming in the city hall at all until we get the results back," said Durand Steadman, councilman. "We're still going to keep it locked though when they get the results back if they don't have it."

Steadman continued to explain the rise of cases has become so prevalent now it's a necessary step.

"We're going back to the lockbox as of today. We're going to start by putting a note on the door and let them know that city hall is going to be temporarily closed for right now," said Steadman.

Steadman remarked the city doors would likely be closed until mid-July or end of July until numbers improve.

"I hope it's not COVID because we was all up there Monday. We probably have to go get tested ourselves, they're going to have to tell everybody that they was around," said Steadman.

A motion carried to close the doors on city hall and the two workers that have been tested for COVID-19 be off 14 days with compensation for their service.

The meeting was adjourned. 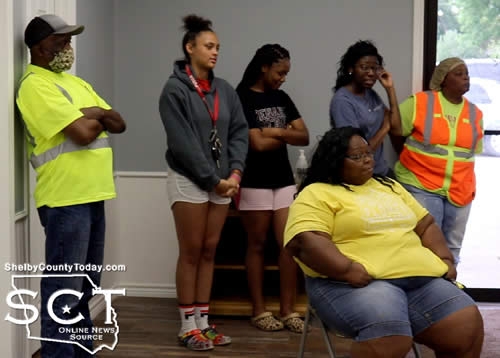 June 24, 2020 - The Shelby County Emergency Management office reports as of 8:00am on Wednesday, June 24, 2020, TxDSHS has reported 1 new cases for a total of 258 cumulative cases of COVID-19. DSHS reports 24 more recoveries, 18 of those recoveries were previously on the “lost to follow list” but have been reported as recovered now. The total recoveries is now 141 leaving 109 active cases.

DSHS also reports of the 258 cumulative cases, 16 of those cases are "lost to follow" which means DSHS has not been able to contact them to follow up on their recovery. 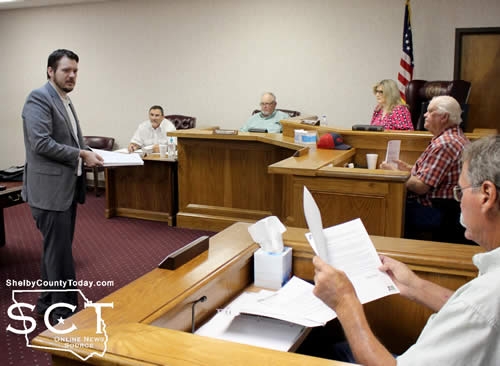 Representing the accounting firm was Justin Matthews, CPA. Provided by the firm is a letter giving a summary of all communications required as part of the audit, outlines of any changes in accounting, and the packet which includes the annual financial report.

Matthews stated the Texas County and District Retirement System (TCDRS) pension has done so well in the past that the portion related to Shelby County was actually overfunded, which he said was really good as the market had performed better than anticipated.

TCDRS cuts off their measurement of the financial year at the end of the calendar year, and he said December 2018 was a very bad month for the market.

"So what that did is that turned that asset into a liability. So rather than having a, I think it was around a $15,000 net pension asset, we wound up now having a pension liability of almost $1.3 million," said Matthews.

That doesn't mean the county would have to suddenly fund $1.3 million immediately, and Matthews said the market already rebounded in 2019, and was actually fairly solid.

"Losses that were incurred here during 2020 have actually already been recovered as well. So this is just a snapshot in time where they measure this actually was just a really bad period for measurement," said Matthews.

Matthews explained that made the pension liabilities appear much higher in the report, and was probably the most significant item that's changed.

Capital leases were another focus of Matthews which generate more liability on the county. Capital leases due in one year are $206,012.

"So many of the equipment leases that we do actually meet the criteria for what they call capital leases which is the same as if you bought them and financed," said Matthews. "We've gotten the assets on the books and we've got a liability that offsets it."

Paying the leases is counted as a liability rather than just being an expense.

Most of the decrease in fund balance comes from the Road and Bridge departments, and most of that is just due to repairs, explained Matthews. There was a large gravel expense during last year, making a lot of that impact. This also includes equipment purchases.

"When you look at expenditures of $1.6 million rest assured we did not have a cash outlay of $1.6 million.," said Clint Porterfield, County Auditor. "That was not the budget, but as Justin has explained what the capital leasing that we do, that expenditure for the new lease of a piece of equipment, even though we've only made one payment on it, the grand total of the lease is in that number."

Porterfield explained that is a good example of year end accruals for the capital lease that Matthews described affecting the county expenses. When reviewing actual expenditures, especially on the operating expense line.

One glaring issue the outside auditor presents to the commissioners every year is inadequate segregation of duties. The county doesn't have an adequate separation of duties in the Justice of the Peace offices to assure that all transactions are properly accounted for during the year.

The audit report indicates there is a risk due to a lack of preventative controls of material misstatement in the financial records due to the lack of adequate segregation of controls related to these financial transactions. The county relies on detective controls to detect and correct errors after the fact with review processes.

A direct example of this issue not openly addressed in court was when former Justice of the Peace for Precinct 4 Jenny Hicks, who was also Tenaha City Municipal Judge at the time, was alleged to have unlawfully appropriated and/or misused traffic fines paid to the city of Tenaha in the amount of $6,685.50. As a result, she was indicted for theft, and abuse of official capacity August 1, 2018. The case remains open and not yet prosecuted, and the question remains, are any county funds through the JP office unaccounted for from that time period?

"Anytime we see some of those duties that are held by one person we say, we might have an issue, just be aware of it," said Matthews. "It's not always something that we have to put something in place to address. It's just something we need to be aware of."

Commissioner Tom Bellmyer asked Matthews if he audits other counties and what the resolution there may be in dealing with issues of segregation of duties.

"The best way to alleviate segregation of duties issues is to add additional staff," said Matthews. "I wouldn't say it's always necessary to add an additional staff, but rather split the responsibilities of those people amongst others.

Measures have been taken by the County Auditor and Treasurer to catch any financial error in the JP systems.

"We have done some things to help alleviate that. Not necessarily hiring a body or another set of eyes, but we do now have some access to by our, treasurer and others, myself included to those systems used by the JPs, which we did not have before," said Porterfield. "So we now have some oversight on the desk review responsibility, where we can go into those systems and see what activities are taking place that we did not have before. So we're taking steps."

DSHS also reports of the 257 cumulative cases, 34 of those cases are "lost to follow" which means DSHS has not been able to contact them to follow up on their recovery.

June 22, 2020 (Update) - Shelby County Outreach Ministries is glad to announce that we were not exposed to COVID-19 and feel it is safe to resume operations. Helping Hands will be open on Wednesdays from 10-2 and on Fridays from 10-2 in order to distribute emergency food boxes. We will continue to serve clients through Drive-Thru only. Please stay inside your vehicle with your windows rolled up. Have your ID available to show through the window. Senior Citizens will continue to be served through frozen meals and phone calls. We appreciate your understanding while we strive to take care of those in need in our community. For questions or concerns please call 936-598-4990.

June 19, 2020 - Due to the possible exposure of employees to the COVID-19 virus, we believe it is in the best interest of our staff and clients to shut down operations of Shelby County Outreach Ministries for 14 days to prevent further exposure.

We will have all facilities and equipment cleaned and sanitized before opening back up to the public.

Thank you for your patience during this time. But we must keep everyone as safe as possible. So, at this time all programs will be shut down from today, June 19, 2020 to reopen on July 6, 2020.

DSHS also reports of the 252 cumulative cases, 34 of those cases are "lost to follow" which means DSHS has not been able to contact them to follow up on their recovery.

According to a Texas Department of Public Safety (DPS) press release, a DPS trooper responded to a two-vehicle crash last night on SH 7 at FM 2713.

The preliminary crash investigation indicates at approximately 10:15 p.m., a 2002 Ford pickup disregarded the stop sign on FM 2713 and drove into the path of a 2016 Toyota pickup that was eastbound on SH 7.

The driver of the Toyota is identified as 26-year-old Timothy Quinn from Nacogdoches. Quinn was also transported to Nacogdoches Memorial Hospital for possible treatment.

This crash remains under investigation. No additional information is available at this time.

DSHS also reports of the 237 cumulative cases, 34 of those cases are "lost to follow" which means DSHS has not been able to contact them to follow up on their recovery. 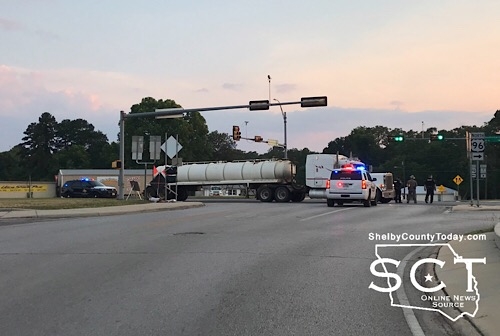 Law enforcement officers with Center Police Department and Texas DPS are on scene to divert traffic until the location is clear.

Drivers should use caution approaching this intersection until the 18-wheeler is no longer there.