Alexander Nathan Barter pleaded guilty to attempted coercion and enticement of a minor and distribution of child pornography before U.S. Magistrate Judge Keith Giblin on December 20, 2019.

According to information admitted by Barter as part of his plea, in October 2018, Barter posted an ad on a dark web site stating “I’d like to try necrophilia and cannibalism, and see how it feels to take a life. If you’d be willing to let me kill you, are in the US (preferably in the south) and can travel by car, contact me.” An undercover officer saw the ad and responded, utilizing the persona of a father with a 13-year old daughter. Between October 9, 2018 and October 19, 2018, Barter and the undercover officer exchanged a series of messages that included Barter’s repeated interest in raping, killing, and eating the 13-year old child. Barter provided the undercover with instructions on traveling from Florida to Shelby County, Texas, what to tell the child to get her acquiescence to travel, and how to conceal evidence of their crime. On October 19, 2018, Barter arrived at the designated meet site in Joaquin, Texas with a knife, trash bag, cellular phone, and a tablet.

“These are the cases that remind us that evil is real,” said U.S. Attorney Joseph D. Brown. “It also reminds us that we are fortunate that we have law enforcement working to stop these things.”

As part of his plea, Barter also admitted to using a social media communications application, the internet, and digital devices he owned to communicate with other individuals about child pornography. On October 14, 2017, Barter offered to send videos depicting the sexual exploitation of a prepubescent female to another individual. The individual accepted the offer and Barter sent the files, along with descriptions of their contents.

Barter entered into a plea agreement with the government that includes a sentence of 240 months imprisonment on each count. Each party has reserved the right to argue that the sentences should run concurrent or consecutive. Accordingly, Barter will face a minimum term of 20 years in federal prison and a maximum sentence of 40 years when he is sentenced. A sentencing date has not yet been set and the actual sentence will be determined by a federal judge at sentencing. 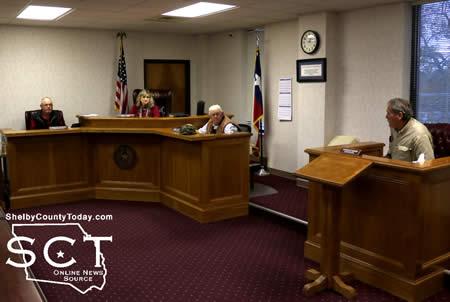 As determined by the outcome of the meeting, the commissioners have removed all amenities pertaining to the office of Constable Precinct 4, Jake Metcalf.

A motion was made by Tom Bellmyer, Commissioner Precinct 4, to take possession of equipment and the vehicle of Constable Precinct 4, Jake Metcalf. He also stated there would be additional paperwork to be processed by Gary Rholes, County Attorney, to go along with the motion.

Rholes indicated an addition to the motion to include the keys belonging to the Constable office.

Bellmyer added the keys to the Constable Precinct 4 office area and courtoom would also need to be taken into possession.

Rholes also indicated he would present a letter to Metcalf's attorney for Metcalf to forego his paycheck for the time being.

This also included whatever benefits such as insurance, effective today, December 20, 2019.

The motion was seconded by Roscoe McSwain, Precinct 1 Commissioner, and the motion carried.

Additional information as to why this action was taken is not yet available, and will be updated on Shelby County Today as it comes to light. 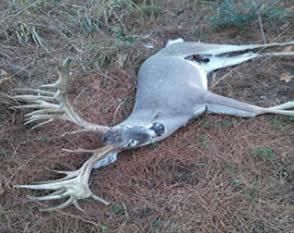 December 20, 2019 - (Flier) - Texas Game Wardens in Shelby County are seeking information leading to the arrest and conviction of the person or persons responsible for this illegal act in which a deer was illegally shot. A reward of up to $1,000 is being offered for that information.

The incident is reported to have taken place on or about Saturday, December 14, 2019 in a high fenced area on FM 2026 near Center, the deer was found shot and left to waste. 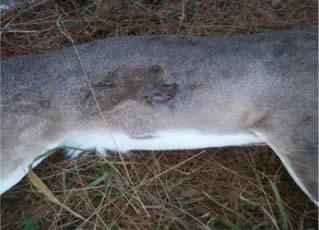 The charge stems from an incident which took place one year ago.

A grand jury impaneled for the July term 2019 of the 123rd Judicial District Court indicted Rholes for driving while intoxicated - 2nd, class a misdemeanor. The indictment alleges on December 18, 2018 Rholes was driving intoxicated in an automobile with an open container of an alcoholic beverage. The document further alleges there was another container in the vehicle which had been opened and contained alcohol.

The grand jury further indicted Rholes for reckless driving, misdemeanor b. The indictment alleges on December 18, 2018 Rholes recklessly drove a vehicle in a willful or wanton disregard for the safety of person or property. The indictment further states this was done by driving on the wrong side of the road toward oncoming traffic and at an unsafe speed swerving between lanes of traffic and into a ditch.

Rholes was already arrested in 2018 for the driving while intoxicated charge; however, not the reckless driving charge. A warrant was issued for Rholes following the indictments for that charge.

"County Committee members are a critical component of the day-to-day operations of FSA,” said Lance Jacobs, county executive director. "They help deliver programs at the county level and work to serve the needs of local producers. All recently elected county committee members will take office in January 2020 and will be joining the existing committee.”

Every FSA office is served to by a county committee made up of local farmers, ranchers and foresters who are elected by local producers. Nearly 7,800 FSA county committee members serve FSA offices nationwide. Each committee has three to 11 elected members who serve  three-year terms of office.

County committee members impact the administration of FSA within a community by applying their knowledge and judgment to help FSA make important decisions on its commodity support programs, conservation programs, indemnity and disaster programs, emergency programs and eligibility.

County committee members impact producers through their decision making and help shape the culture of a local FSA office. They also ensure the fair and equitable administration of FSA farm programs in their counties and are accountable to the Secretary of Agriculture. Members conduct hearings and reviews as requested by the state committee, ensure underserved farmers, ranchers and foresters are fairly represented, make recommendations to the state committee on existing programs, monitor changes in farm programs and inform farmers of the purpose and provisions of FSA programs. They also assist with outreach and inform underserved producers such as beginning farmers, ranchers and foresters, about FSA opportunities.

For more information, visit the FSA website at fsa.usda.gov/elections or contact the Nacogdoches-Angelina-Trinity-San Augustine-Shelby County FSA office at 936-564-5891 Extension 2.

December 17, 2019 - A Shelby County man lost his life in a structure fire in the Oakdale Community, as reported by authorities.

Deputy Jake Gross was dispatched to the location of the home on County Road 2625 in the Oakdale Community and when he arrived a fatality was confirmed. Family members identified the individual as being Bobby Joe Cartwright.

Lt. Investigator Del Birdwell performed the fire investigation and assisted with the death investigation. He concluded the fire was accidental and most likely began in the front part of house due to a wood heater located there. Cartwright was located midway between the heat source at one end of the building and the exit to the home at the other end of the structure where he succumbed to his injuries.

The fire is believed to have occurred sometime after 12-midnight Friday, December 13, 2019. The house was situated behind other structures, secluded from immediate view. A family member who was going hunting discovered what remained of the building and contacted the Sheriff's Department.

The inquest was performed by Marla Denby, Precinct 2 Justice of the Peace, Forensic Medical in Tyler, Texas where an autopsy will be performed.

December 12, 2019 - Due to the construction on the sidewalk in front of the Shelby County Clerk's Office on the downtown Center square, and for the safety of our customers, we will be locking our front door for the next two weeks, beginning today, December 12, 2019. We do have our back door unlocked, and you can park at the active courthouse and walk across the road to the back of our office, and come through the back door. We do have a sign to let you know which door to use. Thank you for your understanding and patience during this time.

December 5, 2019 - A Shelby County Grand Jury indicted a former Sheriff's Department Jailer on November 25, 2019 who was arrested earlier in September 2019.

The grand jury impaneled for the July term of the 123rd Judicial District Court handed down an indictment of Jayaveon Jacoy Standley for violation of civil right of person in custody: improper sexual activity.

The indictment alleges, on September 25, 2019, Standley engaged in deviate sexual activity with an inmate who was in custody in the Shelby County Jail. 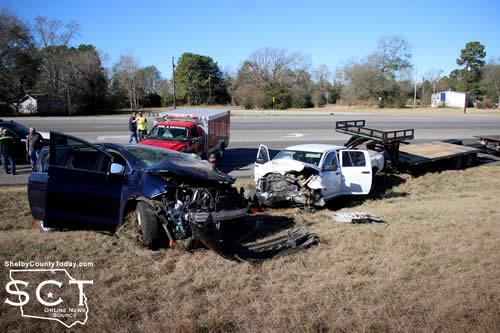 It appeared the collision occurred at the intersection of FM 157 and U.S. 59 between a blue Chrysler Pacifica and a white Dodge Ram pickup truck hauling a flat bed trailer.

According to information provided by Tenaha Police Chief Jeremy Pope, the Tenaha Police Department (TPD) continues to investigate a fatal motor vehicle crash that occurred on Wednesday, December 4, 2019 at approximately 9:30am. The crash occurred at the intersection of Loop 157 and US Highway 59 North. 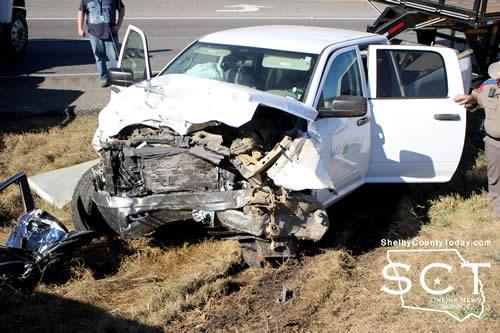 The preliminary investigation has indicated that a blue 2017 Chrysler Pacifica driven by De'Undria Jackson, 21, of Tenaha was northbound on Loop 157, and entered the intersection at US Highway 59. While crossing the South bound lanes of traffic the vehicle collided with a white 2010 Dodge Ram pickup driven by Martin Aguilar, 50, of Brownsboro, Texas hauling a gooseneck trailer.

Jackson was pronounced deceased at the scene by Jackie Kirkwood, Justice of the Peace Pct. 4. 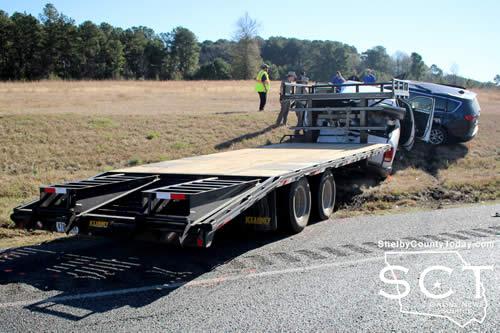 The family of the deceased has been notified. This case continues to be under investigation by TPD and no charges have been filed at this time.

Three passengers from the pickup were transported to Nacogdoches Medical Center - Shelby Emergency Department in Center for treatment of possible injuries. Those passengers were Carlos Reynoso, 28, Luis Moreno, 60, and Juan Espiriceta, 39. 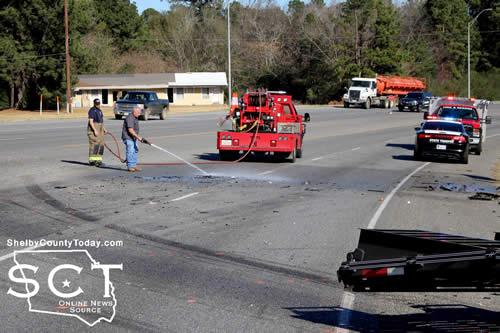 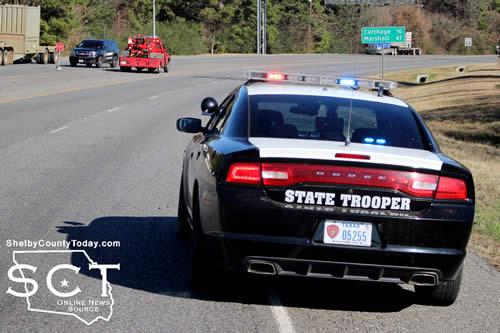 December 2, 2019 - A Center man has been sentenced December 2, 2019 to 150 years imprisonment, according to information released by the Shelby County District Attorney's office.

Six cases are the total number referenced in the press release; however, only two are named. The two cases specifically referenced are from a September 11, 2016 incident in which James received two aggravated sexual assault, 1st degree felony charges.

The following information includes the charge and number of years jail time James will receive as a result of his convictions.

Due to the plea agreement, one case of assault on a public servant against James was dismissed,

According to the press release issued by the District Attorney's office, Defendant Anthony Letroy James was convicted and sentenced to a total of 150 years imprisonment in the Texas Department of Criminal Justice Institutional Division.

James was convicted on six cases, including two charges of aggravated sexual assault for which he received two separate sentences of forty (40) years each. The matter was resolved via plea bargain reached between Shelby County District Attorney Stephen Shires and the defense counsel for Mr. James, just before a jury trial was set to begin in the 123rd Judicial District Court, Honorable Judge LeAnn Rafferty presiding.

The District Attorney appreciates the folks that reported for jury duty this morning, and their willingness to hear a difficult case. Because of that service, justice was served and the victim in the cases is now able to move forward in her life, putting this matter squarely behind her.