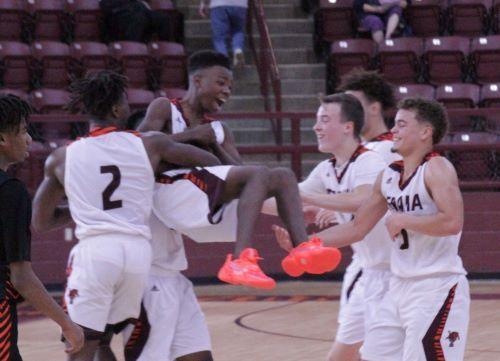 Teams from around the state as well as eight local teams are in their opening round of elimination play and some will have second round games as early as this afternoon.

The Tenaha Tigers Junior Varsity shocked a perennial finalist, the Laneville Yellowjackets with a 53-51 overtime win on Thursday morning. The game came down to a last second Debraelyn Cooks shot at the overtime buzzer.

The Shelbyville Lady Dragons went back and forth with the Centerville Lady Tigers in their opening round game. SHS led 23-12 at the end of the first period but saw Centerville take a 34-27 lead by the midway intermission. The Lady Dragons battled back to within one point at 41-42 by the start of the fourth quarter. Centerville outscored Shelbyville 16-8 in the final stanza which gave them a 58-49 win.

The Tenaha Lady Tigers overcame the Lapoynor Lady Flyers by a 54-49 margin. Tenaha led 13-12 at the end of the first period but trailed 20-23 at the hallway point.  Tenaha outscored LaPoynor 18-13 in the third stanza and led 38-36 going into the final period. Two jumpers and four free throws in the late stages by Lady Tiger Jonisha Thompson made the difference as THS won by a 54-49 score.

The Tenaha Tigers varsity boys won 79-53 over the White Oak Roughnecks. The Tigers gained a 21-7 lead at the conclusion of the first quarter and they led 47-20 at the midway intermission. Tenaha outscored WOHS 24-13 in the third period to extend their lead to 71-35 going into the fourth quarter.