August 25, 2020 - One Stephen F. Austin State University student doesn’t have to worry about paying for the review courses and registration fees associated with the four-part Uniform CPA Examination she’ll take next year.

Nicole Phifer, a graduate student in accountancy at the Rusche College of Business, recently received an important windfall – a $10,000 scholarship from the Public Company Accounting Oversight Board, a nonprofit established through the Sarbanes-Oxley Act of 2002 to oversee the audits of public companies. 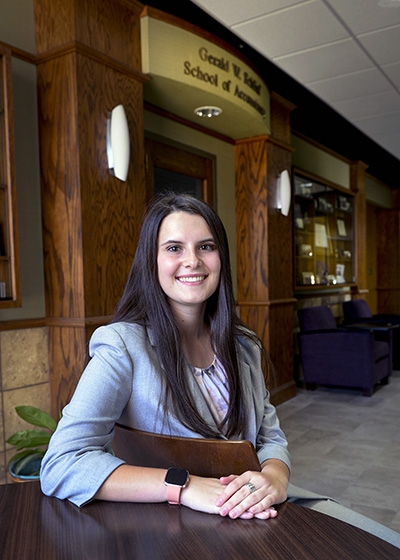 Nicole Phifer, a graduate student in the Schlief School of Accountancy, won a $10,000 scholarship from the Public Company Accounting Oversight Board. Phifer is on schedule to finish the five-year Bachelor of Business Administration/Master of Professional Accountancy program in four years and has an internship lined up for spring semester.

The agency’s scholarships are funded through fines assessed on accounting firms across the world. For Phifer, a 21-year-old graduate student from Rusk, the scholarship means she can focus on maintaining her 4.0 GPA, finishing out her coursework, and ramping up her CPA prep this spring. Considering that the CPA cycle can cost in excess of $3,000 ­– in addition to fall and spring tuition – the scholarship is not just an accolade, but an essential, enabling element of Phifer’s five-year Bachelor of Business Administration/Master of Professional Accountancy program at SFA.

“I didn’t think I was going to get it,” said Phifer, one of 234 students nationwide who received the honor.

Phifer was nominated for the award by Dr. Kelly Noe, director of SFA’s Schlief School of Accountancy.

“She saw potential in me,” Phifer said. “She sees potential in students that they might not see in themselves.”

With Phifer, the potential was not hard to find. She took an accounting course during the fall semester of her first year in 2017 and never looked back. Along with the 4.0 GPA, Phifer worked at University Finance and Administration ​as a student assistant, is president of accounting honors group Beta Alpha Psi, is a member of business honors society Beta Gamma Sigma, and is a graduate assistant at the business college.

Phifer already has an internship lined up at Henry & Peters in Tyler, a blue-chip regional accounting firm founded in 1929. And if the firm makes an offer for permanent employment, Phifer, who has yet to decide on whether her focus will be on tax or audit, will oblige.

“People talk about going to Dallas or Houston, but Tyler is big enough for me,” she said, noting that her family would be just 40 miles down the road.

According to PCAOB, since 2011 the organization has issued $13.7 million in scholarships to 1,370 students at 473 institutions. The nonprofit reports that women and minority recipients have been on the rise since 2017.

In some instances, the fines that pay for the scholarships are enormous, as was the case last year when a Mexico-based firm and its associates were assessed $530,000. While many settlements involve US companies, plenty include registered firms based in places like Canada, Colombia, Hong Kong, India and South Korea. If the proceeds from an auditing penalty out of Seoul can end up in a place like Nacogdoches, then that’s something Phifer can accept.

“Whoever came up with that idea knew what they were doing,” she said.