Across the Preacher’s Desk: For I Believe God! 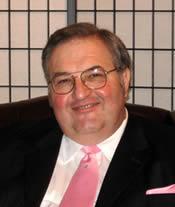 July 18, 2019 - If you remember from Paul’s letter to the church at Rome, he had a burning desire to preach the gospel in the Capital city. In Acts 27 we find Paul on his way to Rome, yet he is going as a prisoner. While there, he would have great success and members of Caesar’s household would be converted.

However, the voyage to Rome was not without incident. A great storm occurred which threatened to tear the ship in pieces. The crew struggled to keep the ship afloat. They lightened the load by throwing everything overboard that was expendable. They went for days upon days not being able to eat.

The faith that sustained Paul on that voyage and in that storm can sustain us in the storms of life. Whatever storm may be blowing through our lives, we can be of good cheer, for “we believe God”. Like the words of that old familiar song, “Be not dismayed, whet-er be tide, God will take care of you”, and He will.

It’s something to think about… tbp

Join us for worship this coming Lord’s day at the Center Church of Christ, 110 Hurst Street, Center, Texas or online at www.centerchurchofchrist.com