May 28, 2021 - AG Paxton reports on five individuals arrested during its Law Enforcement Round Up and one of the fugitives was a Shelby County man.

The Child Exploitation Unit made one arrest last week.

In Williamson County, Peter Ray Craig was arrested on five counts of Possession of Child Pornography with Prior Conviction. This case was received as a NCMEC CyberTipline report involving the upload of images of child pornography to an online photo storage platform. On May 20, investigators executed a search warrant at Craig’s home in Round Rock where more files of child pornography were found. During an interview, Craig confessed to uploading and storing files of child pornography. Four additional counts of Possession of Child Pornography with Prior Conviction were added to Craig’s charges. Investigators seized his cell phone for examination by the Digital Forensics Unit. Craig was transported to the Williamson County Jail. 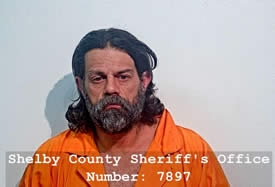 In Shelby County, Joseph Philip Landry was arrested in Center on May 20. Landry had outstanding warrants from the State of Louisiana for 30 counts of Pornography Involving Juvenile (under the age of 13) and one count of Unauthorized use of a Wireless Router System; Pornography involving Juveniles (under that age of 13) issued by the Louisiana Bureau of Investigation. The Unit was assisted by the Joint East Texas Fugitive Task Force.

In Travis County, Zaoin Deshone Gilmore was arrested in Austin on May 17. Gilmore had an outstanding warrant for Aggravated Robbery with a Deadly Weapon issued by the Round Rock Police Department. This arrest was made while working with the United States Marshals Lone Star Fugitive Task Force out of Austin.

In Dallas County, Anthony Michael Arce was arrested in Rowlett on May 19.  Arce had outstanding warrants for Aggravated Sexual Assault of a Child, 1st Degree Felony and Sexual Performance by Child, 2nd Degree Felony issued by the Marble Falls Police Department.

In Harris County, Gary Wayne George was arrested in Houston on May 19. George had open felony warrants for Rape and Possession of Pornographic Material-Minor issued by the Autauga County Sheriff’s Office. George also had a non-extraditable warrant for a Probation Violation issued by the Collier County Sheriff’s Office in Florida. George is a convicted sex offender. In 1996, he was convicted of Attempted Sexual Abuse in Montgomery County, Alabama. This arrest was made while working with the United States Marshals Gulf Coast Fugitive Task Force out of Houston.