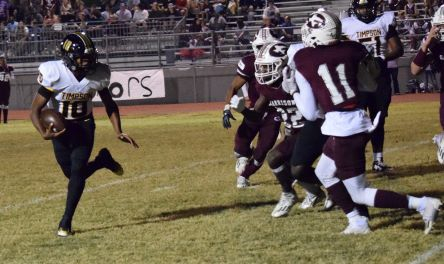 The Timpson Bears varsity football team completed a perfect 10-0 regular season, as well as a 6-0 District 11 2A-1 season, by defeating the Garrison Bulldogs by a 44-38 score, on Thursday at GHS. Garrison finishes with a 4-2 conference mark. The game was the two teams ‘Battle of the Attoyac’ a yearly rivalry for these two schools.

Although this game was close throughout, Timpson never trailed. They gained their first lead when Vosky Howard capped a 50-yard Bears scoring drive when he went into the endzone on an 11-yard touchdown run. Terry Bussey added a 2-point conversion run to give Timpson an 8-0 lead with 9:52 left in the first quarter.

The Bulldogs answered back with an 80-yard scoring drive which saw quarterback Brayden Davidson bolt into the endzone on a 1-yard keeper run for the score. An extra point conversion run attempt failed and Timpson held an 8-6 advantage with 4:45 still left in the opening frame.

Bears quarterback Terry Bussey next capped a 2-play THS scoring drive by racing 62-yards for a touchdown with 3:57 left in the opening stanza. He also converted a 2-point conversion run to give the Bears a 16-6 advantage.

Disaster struck for GHS when Bussey took the ensuing kickoff return 82 yards for a Bear’s score. Howard converted a 2-point run and Timpson held a 32-18 lead with 2:26 left in the second period.

Garrison went 66 yards in three plays and Rasberry converted a 5-yard touchdown run with just 1:02 left in the second quarter and the Bulldogs cut the Bears lead to 32-25.

With just 19 seconds left before the midway intermission, Bussey broke loose for a 32-yard score. Timpson led 38-25 at the halftime break.

Rasberry scored on a 5-yard run with 1:05 left in the third quarter to cut Timpson’s lead to 38-31. After another failed conversion try.

Bussey scored on a 70-yard keeper run for a touchdown with 4:55 left in the fourth quarter of play. A failed conversion try saw the Timpson lead at 44-31.

Garrison next went on a 72-yard scoring drive and Davidson hit McCrumby for a 5-yard touchdown reception. A Will Rimsky extra point kick helped GHS cut the Bears lead to 44-38 with just 1:36 left in the contest. Garrison tried an onside kick to try to regain possession but Timpson alertly recovered and ultimately expired the remaining playclock for the win. Both teams will be competing in this year’s Texas UIL State Football Playoffs Bi-district round next week. The Timpson Bears will face the Groveton Indians at Jasper Bulldogs Stadium at 7 p.m. on Thursday, November 10, 2022.