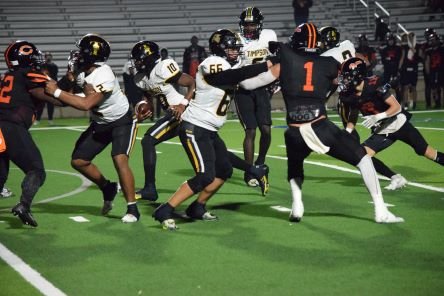 The Timpson Bears varsity football team won a 41-14 Region III playoff elimination game over the Centerville Tigers (10-3) on Friday. The game gives the Bears a 13-0 season mark and advances them to the Region III State Quarterfinals where they will face the Cooper Bulldogs (13-0). Cooper advanced by defeating the Joaquin Rams (9-3) by a 33-11 score last Friday.

Centerville’s Tiger offense had early success moving the football but their first drive stalled when senior defensive lineman LT Washington recovered a Centerville fumble on the Bears 7-yardline to give THS possession with 6 minutes left in the first quarter. The Bears capitalized by driving the ball 93 yards in 9 plays. Junior quarterback terry Bussey capped the drive with a 58-yard run to the endzone to finish the drive. Junior Tyler Lane kicked the extra point to give Timpson a 7-0 lead with 9 seconds left in the first stanza.

The Tigers were forced to punt the ball away early in the second frame when their drive stalled. The Bears drove 70 yards and Bussey capped the drive with his second touchdown run with 4:51 remaining in the second quarter. Another Lane extra point kick put THS up 14-0.

Centerville answered with a 70-yard drive capped by a 3-yard run by senior Paxton Hancock. An extra point by sophomore Gabe Landis cut the THS lead to 14-7 with 1:14 left in the first half.

On Timpson’s next possession Bussey found junior receiver Vosky Howard for a pass reception which saw him bolt, spin, and twist his way to the endzone while carrying would-be tacklers in tow. With just 32 seconds remaining Lane added another extra point kick for the first half’s final score. The Bears held a 21-7 advantage at the midway break.

A 50-yard completion for a score, from Bussey to Howard with 10:08 left in the third period, gave Timpson a 27-7 lead after a failed extra point attempt.

A Tiger’s 4-yard rushing score from junior Zantayl Holley cut the Bear’s lead to 27-14 with 5:22 left in the third frame.

The Tigers attempted an onside kick but this gave the Bears excellent field position at midfield. Bussey capped a 9-play scoring drive with a 10-yard quarterback keeper run for the next score. Another Lane extra point kick gave the Bears a 34-14 lead with just 56 seconds left in the third quarter of play.

Centerville’s final drive of the third stanza resulted in a miscue as Howard recovered a Tiger’s fumble to give Timpson possession at the CHS 36-yardline at the end of the period.

The fourth quarter saw Bussey cap a 4-play 69-yard drive with a 23-yard scoring run. A successful extra point with 10:27 remaining in the contest would prove to be the game’s final score. Timpson held a 41-14 lead throughout the remainder of the contest. An interception near midfield by junior Bears linebacker Cam Bennett helped THS to keep possession and keep the playclock ticking. The Bear’s defense was able to hold Centerville’s next drive in-check to help in the win. The Bear’s offense was content to simply run out the clock on their final possession.

The Timpson Bears and Cooper Bulldogs will face off on Friday, December 2, 2022, at 7 p.m. at Lindale Eagles Stadium.