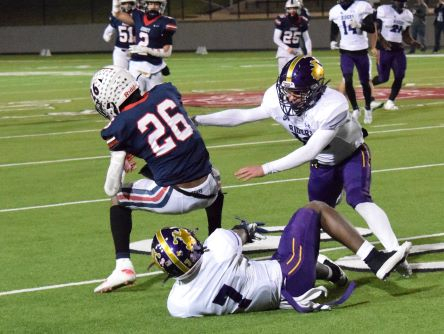 The Center Roughriders led much of Saturday’s Texas UIL Football Class 4A-II Area Elimination game with the Aubrey Chaparrals (11-2). The Roughriders ultimately fell just two points short of advancing to the regional round game. The Roughrider’s season ends with them posting an 8-4 record as Area Finalist.

The Chaparrals tied the game at 7-7 with a 26-yard touchdown run from Labraylon Bell and a Bryson Bohannon extra point with 10:55 left in the second quarter. One minute later saw Center retake the lead on a Cross 25-yard keeper run for the score. The play was set up when Cross hit Christopher Evans on the play before for a 28-yard reception giving CHS good field position. Hernandez added on another extra point kick and CHS led 14-7 with 9:55 left in the second stanza. Center had another possession late in the half but lost a fumble to Aubrey in the last minute.

Early in the third frame Aubrey tied the game at 14-14 when Blayne Polen hit Tay Ross for a score.

Center answered when Wilburn scored on a 35-yard reception from Cross which helped CHS take a 21-14 lead with 5:03 remaining in the third period of play.

Ja’Marion Crawford gave CHS possession of the football in the final frame when he intercepted a Aubrey pass attempt and Center made it pay off when Cross hit Evans for a 54-yard score which tied the game at 28-28 after another Hernandez extra point kick with 5:56 left in regulation. The teams remained tied throughout the final period and the game went into overtime.

In the first overtime period each team got a possession from the opponents 25-yard line. Aubrey got a touchdown on a Labraylon Bell run and an extra point kick from Bohannon to go up 35-28 but CHS tied it up at 35-35 when they answered with a touchdown run by Dixon and another Hernandez extra point kick.

The third overtime period saw the football moved from the 25-yardline to the three for each team to get a 2-point conversion attempt. Both team’s defenses held resulting in the game remaining tied at 41-41 and heading into the fourth overtime of the tiebreak.

In the fourth tie-breaking overtime period Center's offense was stopped short of the endzone. Aubrey was able to get the blocks needed for Labrylon Bell to bolt into the endzone and give AHS the final 43-41 advantage, giving them the elimination win and advancing the Chaparrals to the regional round of the playoffs.