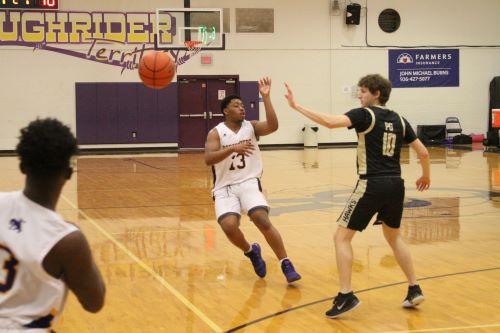 The Center Roughriders boy’s basketball teams concluded pre-district action by hosting the Pleasant Grove Hawks 9th Grade, Junior Varsity, and Varsity teams. The ninth grade boys contest was close early and Center trailed only 12-14 at halftime. The PG Hawks began to pull away during the third period and they led the ‘Riders 28-14 going into the final period of play. The Hawks eventually beat the Roughriders by a 38-27 margin.

Junior Varsity saw many lead changes during the contest. Center trailed Pleasant Grove’s boys 8-11 at the end of the first quarter. The ‘Riders took a narrow 19-18 lead into the midway break. The Hawks overtook the ‘Riders and led 31-26 going into the fourth quarter but Center bounced back to win by a 34-33 score.

The varsity boys contest was an exciting back-and-forth contest which saw Center lead 13-10 at the end of the first quarter and they held a 29-21 lead at the midway break. Pleasant Grove battled back and the Hawks tied the game at 42-42 by the end of the third stanza.

A 3-point shot by the Hawk’s gave them a 45-42 lead and they led by as much as six points during the fourth quarter. The’ Riders gave an excellent effort to try to tie things up but eventually fell to the Hawks by a 57-54 score.