Dragons Win Over Alto, Move on to Quarterfinals 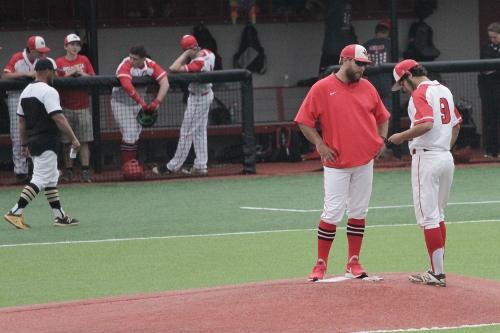 The Shelbyville Dragons Varsity Baseball Team has advanced through the Area Round of the UIL Baseball Playoffs by defeating the Alto Yellow Jackets, in both Game 1 and Game 2, by a 2-1 score.

The Dragons improved their season record to 21-4 after winning District 23 Class 2A with an unblemished 16-0 mark. Alto’s season ends with them posting a 13-11 overall mark. The ‘Jackets were the second place representative of District 22 2A with a 7-5 district mark.

Trevor Wilburn scored Game One’s first run when he reached home on a bases’ loaded walk in the top of the first inning. Alto tied the game at 1-1 in the bottom of the fifth inning but Shelbyville scored the game’s final run when Kaleb Campbell scored on a fielder’s choice in the top of the sixth frame.

Game 2 was a no-hitter for Shelbyville starter Zack Clark who pitched the whole game, striking out seven AHS batters and only giving up 5 walks. Alto only had six baserunners and scored their sole run on an error by the Dragon’s infield.

Kolby Parker scored the Dragon’s first run when he walked to start off the bottom of the first inning and scored later on a Yellow Jacket error. Grady Clay gave SHS a 2-0 lead after reaching base on a 2-out infield hit in the bottom of the fourth inning, he then came home on an error by a Alto infielder on a hot grounder hit by Kolby Parker.

Shelbyville will face Cushing in the State Quarterfinals round next. The time and date will be made available later.