June 30, 2020 - Bill Elliott, founder and chairman of Elliott Electric Supply, has been named the 2020 Ralph W. Steen Memorial East Texan of the Year. 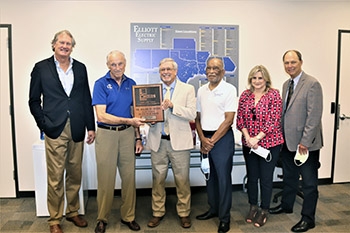 The Steen award was named in honor of the beloved past president of Stephen F. Austin State University.  It honors an individual who has played a major role in leadership and service to Deep East Texas. Deep East Texas Council of Governments Board President Bill Holder made the announcement of Elliott’s award Monday morning during a formal recognition of the Steen recipient. State Rep. Travis Clardy also spoke on Elliott’s award.

“We’ve just been fortunate to have the right people at the right time in the right place,” Elliott said after receiving the award. “I’m very flattered with this.“

A driven and hard worker, Elliott remains an inspiration due to his dedication to the East Texas community, as well as his business and industry. Elliott began his career in the electrical distribution industry working for his father while earning his degree in music at Louisiana Tech in Ruston, La. After college, Elliott worked full time for his father and started to have his own ideas of how a distributorship should be run. This led him to start a company on his own.

“In 1972, with $20,000 of his own money and an $80,000 SBA loan from Commercial Bank, he and his wife built their first electrical supply company here in Nacogdoches,” Holder said. “It was a success from the start, with first year sales topping half a million dollars.”

Shortly after opening business, Elliott decided the company needed to use computers to track business transactions. In 1974, there were not many choices in software, so he wrote his own. This tradition continues today; Elliott Electric Supply employs over 30 full-time programmers and 45 hardware technicians to cater to the needs of the company.

“The company is also invested in the community, supporting many local causes, especially the fine arts and horticulture departments of SFA,” Holder said. “He contributed greatly in a number of ways, most of it done quietly, without any fuss. But today we want to make a little fuss, to recognize the accomplishments and contributions of this outstanding man.”

The Ralph W. Steen Memorial East Texan of the Year Award has become one of the most prestigious and longest running, recognitions bestowed in East Texas. In 1976, Dr. Ralph W. Steen retired after 20 years as President of Stephen F. Austin State University. He had guided SFA from a small college to a large regional university, and in the process, he contributed greatly to the development of the Deep East Texas region. To honor his legacy DETCOG created this award and presented it to Dr. Steen --and then named the award after him.

The Steen Award is usually presented during the DETCOG's annual membership and awards luncheon in May. Executive Director Lonnie Hunt said while that was not possible this year, the presentation was still very special. "Today we were able to go to the recipient's place of business and honor him in front of his employees," Hunt said. "This was very fitting for a beloved leader like Bill Elliott and we are glad the employees could be a part of it."