Every Veteran Has A Story: Bryan Nelson Brittain 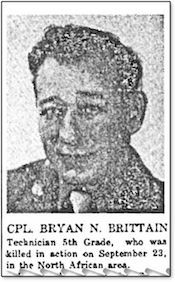 July 15, 2021 - Bryan Nelson Brittain was born on January 29, 1912 to Emma Jane Windham and William Jackson Brittain. He was born in far east Texas, Shelby County where his parents were married December 26, 1889.  Bryan had five older siblings; Florence (1891), Cynthia Elizabeth (1898), Stella Irene (1900), Leon (1906), and Zelma Bell along with younger brother Maron Lamar (1915). They lived on a farm as many did at that time in rural Shelby County. At age 16, his father William passed on July 6, 1928 and was buried in North Jericho Cemetery. Fortunately with the “Great Depression” of the 1930’s just around the corner, the children were all of age to help their mother.

At the 1940 Census, Bryan was living with his cousin Thomas in Center, Texas that serves as the county seat of Shelby. He was employed as a restaurant waiter sometimes working 48 hours a week and earning $600.00 in 1939 ($11,400.00 today).  On October 16, 1940 he complied with the Selective Service Act of 1940 by registering for the military draft at Local Board # 1 in Center. His registration card D.S.S. Form 1 noted the following; Residence, Center, Shelby County, Texas; employed by the B and B Café owned by Allen Beckham in Center; Race, white; five foot, eleven inches tall, 145 pounds with gray eyes, brown hair and a ruddy complexion.(2)

Bryan was inducted into the US Army on January 31, 1941 in Houston, Texas. He trained at Camp Bowie Texas and was assigned to the 143 Infantry Regiment, 36 Infantry Division that had been mobilized there two months earlier. On December 7, 1941 the Empire of Japan staged an unprovoked surprise attack on the US Military installations at Pearl Harbor and Hickam Air Field, Hawaii. Once again the United States was embroiled in another world war but this time on two fronts, Europe and the Pacific.

While in training at Camp Bowie his sister Florence passed on April 15, 1942. In early 1943 the 36th Division along with Bryan and the 143rd Infantry departed for Algeria. On September 3, 1943 the 143rd participated in the Allied amphibious landing at Salerno, mainland Italy. They continued to fight in Italy during the campaign in the Liri Valley to early 1944.  It was during this fighting that Technician Fifth Grade Bryan Nelson Brittain, US Army serial # 38051685 was killed in action, September 22, 1943 at the age of 31. Bryan was buried in a temporary military cemetery in Italy. His comrades would continue the fight until Victory In Europe was won, May 8, 1945.

Following the Japanese unconditional surrender in the Pacific on September 2, 1945, World War II came to an end. More than 405,300 Americans died and families of those positively identified were offered burial options. They could choose burial in an overseas military cemetery or bring the remains of their loved one home to the United States for burial in a cemetery of their choice. Emma chose to bring her son home as did approximately 60% of other families facing the same decision.(4)  It was an enormous undertaking and did not happen overnight.

The Champion Newspaper, Center, Texas, July 15, 1948 reported that his brother Leon received notice that Bryan’s body was enroute home.  Sadly his mother Emma Jane would not see his return as she passed on August 27, 1946 at the age of 76. The Champion of August 5 related the upcoming burial information “the body of T/5 Bryan N. Brittain will arrive in Center, Saturday morning, August 7, at 10:17 with military escort and will be carried to the Mangum Funeral Home. Services will be held at the Chapel Sunday at 4 p.m. with Rev. J. Carroll Chadwick and Chaplain Russell Whiteside officiating. Service at the grave [Fairview Cemetery] will be in charge of the Center Post [Norman Crocker] of The American Legion. Full military honors will be paid. Survivors include; four sisters, Mrs. C. O. Price, Center, Mrs. J. R. Porter, Lamesa, Mrs. G. W. Lane, Center and Mrs. Ed. Fitz, Timpson; two brothers, Leon and Lamar Brittain of Center”. Day is done, God is nigh.

“That these dead shall not have died in vain”…..Abraham Lincoln 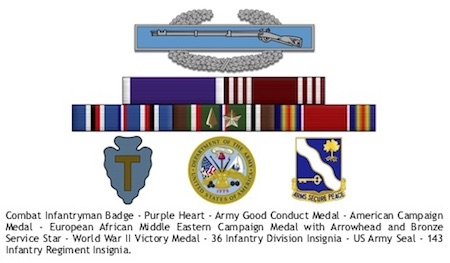