Every Veteran Has a Story: James Curtis Buckley, Sr. 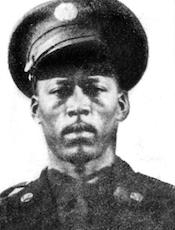 Now nineteen years old James married 15 year old Emily Daniels in Shelby County, Texas on October 15, 1927. In the census of 1930 he was living with wife Emily, now 18 and son, James, Jr., 15 months. During the next decade he and Emily would divorce and marry Esther Mae Gordon on October 23, 1937 in Shelby County. He and Esther lived in what was described by the 1940 census as the “Negro Quarters” in Center, Texas where he drove a truck for a Center Grocery Company.

The Selective Training and Service Act of 1940, the first peacetime conscription in the United States, required all men who had reached their 21st birthday but not their 36th to register with local draft boards. James complied on October 26, 1940 at the age of 30. He registered in Center, the county seat of Shelby Country. At that time he was 6 foot, 2 inches, 180 pounds and still employed in the grocery business. Fourteen months after registering the Japanese would attack the United States at Pearl Harbor Hawaii. War with Japan and Germany was on.

Perhaps because of his age he was not immediately called to duty. Father Isom passed July 17, 1942 at the age of 54 and was buried in the Macedonia Cemetery, Hemphill, Sabine County, Texas.

On February 7, 1944 at the age of 34 James either voluntarily enlisted or was drafted into the US Army in Tyler, Texas. His paperwork showed a grammar school education, divorced and with dependents. Evidently a second divorce had occurred with Emily. He was assigned to the 3959 Quartermaster Truck Company, attaining the rank of Corporal. The following information was taken from the book “The Men and Women in World War II from Shelby County. (No publication date). “Trained at Camp Breckenridge, Kentucky and Camp Campbell, Kentucky. Departed from Camp Myles Standish, Massachusetts for the war in Europe. Served in England, France, Belgium and Germany. He survived the war and was honorably discharged in 1946. For his service he was awarded the European African Middle Eastern Campaign Medal with 2 bronze service stars (denoting 2 major campaigns), World War II Victory Medal, and the Army Good Conduct Medal.”

James and Fannie moved to Dallas, Texas after the war where he was employed as a Freight Handler for a Trucking Company. On April 24, 1966 he would pass at the age of 56 at the Veterans Administration Hospital, Dallas, Dallas County, Texas of heart disease. Funeral arrangements were by Black and Clark Funeral Home in Dallas. His remains were returned to Center, Shelby County, Texas and buried in the Westview Cemetery with his mother Elizabeth, brother Albert and sisters Louisa and Ruby. Son James, Jr. also served with the US Army and is buried in Arlington National Cemetery, Arlington, Virginia. Son Jesse, Sr, a US Army Vietnam Veteran rests in the Dallas Fort Worth National Cemetery. Day is done, God is nigh. 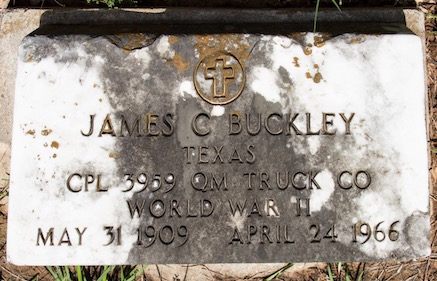