Every Veteran Has a Story: Joseph Martin Prince October 21, 2022 - Shortly after the community of Stockman, Shelby County, Texas was established, Joseph Martin Prince was born there, May 1, 1893. He was the youngest of a dozen children born to Martha Billingsley of Mississippi and John A. Prince, a Tennessee native. His siblings were; brothers Alfred, Aaron, Joel and James; sisters Malissa, Alice, Ida, Izzie, Della, Mina and Nancy. Their father farmed for a living as many did at that time and no doubt the children all had their chores to help out. 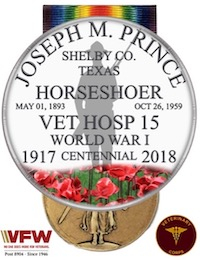 With the United States declaring war on Germany on April 6, 1917, nearly three years after the World War began in Europe, a national army through conscription was needed. The Selective Service Act of 1917 called for three registrations, the first being June 5, 1917 for all men between the ages of 21 and 30. Joseph now 24 complied by registering at Precinct 21, Shelby County, Texas. He listed himself as; employed by his father, single, medium height, medium built with light brown eyes and dark hair. He also claimed no exemption from the draft.

One year later, June 23, 1918, Uncle Sam came calling and Joseph took the oath of enlistment at the County Seat in the town of Center. Living in Timpson that is eight miles from his birth place, Private Prince said goodbye to his family and headed to San Antonio, home of Camp Travis. Here with the 165 Depot Brigade he took his basic training. From there he joined the newly organized Veterinary Hospital # 15 at Camp Lee, Virginia. He became a horseshoer and was promoted to that rank on September 1, 1918. With Vet Hospital # 15, Private Prince set sail for France aboard the transport USS Antigone along with 33 Officers and 2,033 other Enlisted men. His father John, Timpson, Texas was listed as the next of kin. They departed at noon, October 28, 1918 from Short Pier, North Side, Norfolk, Virginia arriving at Brest, France on November 9. Eight days later they moved to their permanent station at the Commune of Gièvres, Loiret-Chere Department of central France.

The American Expeditionary Force required large numbers of animals to accomplish a variety of missions ranging from cavalry mounts, artillery transport to logistical supply and ambulance service. The rugged and muddy French terrain was better suited to animals than gas-powered engines. As a horseshoer, Joseph’s job wasn’t glamorous but one of importance.

With the Armistice being signed shortly after the arrival of Vet Hospital # 15 on November 11, 1918, their duties of caring for the animals did not change. They remained in France until July 3, 1919 when # 15 departed Brest, France aboard the USS Pueblo. Joseph again listed his father John as his next of kin. Ten days later the Pueblo arrived at the port of Brooklyn, New York and the enlisted men were transported to Camp Merritt, New Jersey for discharge processing. 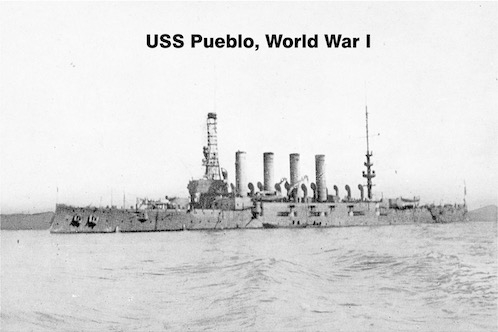 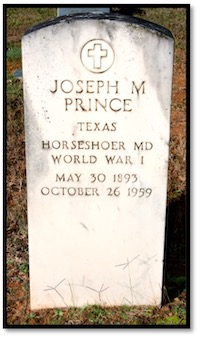 On July 25, 1919 Joseph Prince was once again a civilian. He was authorized to wear the World War I Victory Medal that would be available the following year. Making his way home by train no doubt, he returned to the farm of his parents located in Precinct 8, Stockman and Timpson Road, Shelby County, Texas. Joseph continued to farm for the remainder of his life. His father passed in 1930 and mother in 1931. He saw the start of a second World War on December 7, 1941 when the Japanese attacked Pearl Harbor, Hawaii. He again registered for the draft but at age 48 he would not be called. Joseph passed at the Veterans Administration Hospital in Shreveport, Caddo Parish, Louisiana at 6:30 p.m., Monday October 26, 1959 at the age of 66. Never married, his brother Joel made application for his Veteran Headstone the next day. Funeral services were then held on October 28 at the Mount Olive Church with Rev. W. B. Oliver, pastor of the First Christian Church of Timpson officiating. Interment was in the Mount Olive Cemetery. His obituary that appeared in the October 30 edition of the Timpson Weekly Times did not mention his military service to our country. Hopefully there were Final Military Funeral Honors by a local veterans group. Day is done, God is nigh.