Every Veteran Has A Story: Private Ray Willis Bolton 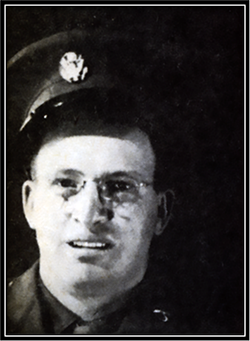 April 28, 2021 - Ray Willis Bolton was born January 31, 1920 in the far east Texas town of Joaquin, Shelby County to Nancy “Nannie” Elizabeth Jordan, a native Texan and Robert Wesley Bolton of Mississippi. His parents were united in holy matrimony on March 6, 1904 in Shelby County and completed the family in 1927 with the birth of the eleventh child James Luey. Two of his brothers died in infancy, Chester, age 1 and Price Lamar, age 3. Other siblings were Lela Mae, Johnny, Lois Florence, Harvey James, Evelyn Louise, Betty Maxine and Gloria Marcell. Like many at that time they lived on a farm in the rural countryside around Joaquin and no doubt the children all had specific chores to help out. Times were hard especially during the great depression that occurred from 1930 to 1936.

Following the death of his father John on June 16, 1941, Ray complied with the Selective Service Act of 1940 by registering for the military draft in Center, the county seat of Shelby on July 1, 1941. His Registration Card, D.S.S. Form 1 noted the following: Age: 21; Residence, RFD 2, Box 11, Joaquin; Self-employed as a farmer; six foot tall, 163 pounds; Blue eyes and red hair, ruddy complexion.(1) Five months later the Empire of Japan attacked the US Naval Base at Pearl Harbor, Hawaii and the United States found itself embroiled in another World War but this time on two fronts, Europe and the Pacific.

At age 22, Ray was inducted into the US Army on November 13, 1942. Taking the oath of enlistment he and other recruits were sent to Camp Roberts in central California that was built in 1940 as an Army World War II replacement training center.(2) Following approximately thirteen weeks of basic Private Ray W. Bolton, serial # 38303150 was assigned as an infantry replacement for the 135 Infantry Regiment of the 34 Infantry Division (Red Bulls). Ray and fellow replacements would have caught up to their unit in North Africa in early 1943. The 34 Division trained intensively for the amphibious invasion of the Italian mainland, Operation Avalanche. Engaging the enemy at the Calore River on September 28, 1943, the thirty-fourth relentlessly drove north to take Benevento, crossed the winding Volturno three times in October and November, assaulted Monte Patano and took one of its four peaks before being relieved on December 9, 1943.(3) It was during this fighting that Private Ray Willis Bolton was killed in action on November 8, 1943 at the age of 23. He died five days before his first anniversary in the US Army. His comrades would fight on until Victory in Europe was declared May 8, 1945 and the formal Japanese surrender September 2, 1945 that ended World War II. The Red Bull Division suffered 2,866 killed in action, 22,545 wounded in action along with 622 missing and 1,368 were taken as prisoners of war.

Following the end of World War II of which more than 405,300 Americans died, families were offered burial options. They could choose burial in an overseas military cemetery or bring the remains of their loved one home to the United States for burial in a cemetery of their choice. Mother Nancy Elizabeth chose the latter as did approximately 60% of other families facing the same decision.(4) It was an enormous undertaking and did not happen overnight. 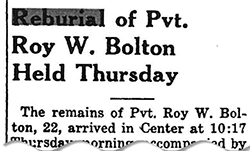 “That these dead shall not have died in vain” ... Abraham Lincoln 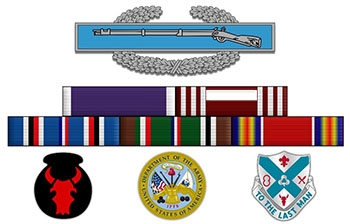