Every Veteran Has a Story: Simeon Norris Bridges 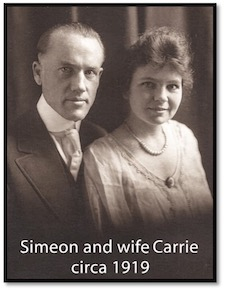 Simeon was enrolled at Southern Methodist University, Dallas, Texas when the United States entered the World War on April 6, 1917. He registered for the military draft in Center, Shelby County the following month on May 29, 1917. His registration card (Form 1, draft # 2405) noted: he was a natural born citizen; student; single; Caucasian; no prior military service; and no exemption to the draft was claimed. Physically he was described as of medium height and built with blue eyes and red hair.(2)

Not waiting to be drafted Simeon joined the US Navy at the recruiting station in Dallas on June 6, 1918, age 25. He was then sent to Mare Island, California as an Apprentice Seaman to begin his navy basic and advanced training. While there the war ended on November 11, 1918 and he was honorably discharged two months later January 31, 1919 at the Naval Training Camp, San Diego.(3) For his service he was awarded the World War I Victory Medal.

Following the war and at the age of 27 he and Miss Carrie Evans, age 23 of Center, Texas were married in Shelby County on August 29, 1919. Having completed his college degree, the census of 1920 showed him living in Itasca, Texas with employment as a public school principal. Carrie was also employed there as a teacher.(4) Following the school year he took the position of High School Principal in McAllen, Hidalgo County, Texas where their son James Nicholas was born January 17, 1921. After a stay of about nine months Simeon became ill and died of typhoid fever on June 8, 1921.(4)

The Champion Newspaper, Center, Texas, June 8, 1921 published the following “Telegraphic advices [sic] were received here Wednesday morning on the death of Norris Bridges, son of J. A. Bridges, which occurred Wednesday morning at McAllen, Texas”. The telegram also stated that “the body would be brought here for burial and it is expected to reach Center Thursday night. Besides his wife, he is survived by his father and several brothers and sisters and many other relatives. Funeral arrangements have not been announced”. Simeon was buried in the Fairview Cemetery, Center, Shelby County, Texas. The family published as card of thanks in the Champion on June 15. Day is done, God is nigh. 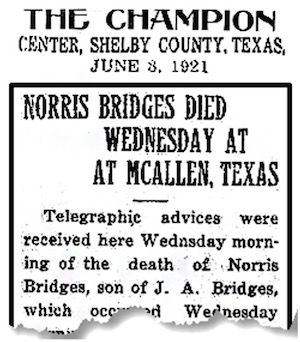 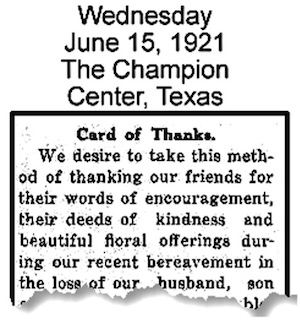