Every Veteran Has a Story: Virgil Bryan Williams August 11, 2022 - Virgil Bryan Williams was born March 31st, 1921, in the far east Texas community of Stockman, Shelby County that is about 16 miles from the county seat of Center. He had two siblings, older brother James Carl and younger sister Margaret Pearl. Their parents, Clara Hancock and Joe T. Williams were tenant farmers living on Stockman-Waterman Road, Precinct 8, Shelby County. Virgil at age 18 married Mary Evelyn Wilson in Center and they lived with her parents in Angelina County where he was employed by his father-in-law at the Southland Paper Mill located in Lufkin Texas.

With the surprise Japanese attack at Pearl Harbor, Hawaii against the US Naval Base, the United States was for a second time involved in a World War. Virgil was now one month shy of his twenty-first birthday and the Selective Service Act of 1940 required him to register for the military draft. On February 16th, 1942, he registered at Local Board # 1, Lufkin, Angelina County, Texas. His D.S.S. Form 1 gave his residence as Route # 3, Lufkin with employment at the Southland Paper Mill. He was five foot, eleven and one-half inches tall with brown eyes and hair.(1)

Shortly after registering, Virgil and Mary along with newborn son James Byron moved to Houston where he found employment as a railroad fireman. Unfortunately, the marriage ended in early 1944. Virgil was inducted into the US Army on May 3rd, 1944, at Camp Wolters located just outside the city of Mineral Wells, Texas. 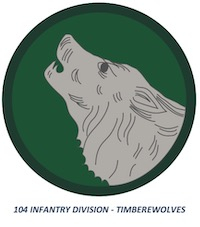 Following basic training Virgil was assigned to Company E, 413th Infantry Regiment (Seagulls), 104th Infantry Division (Timberwolf Division) that was training at Camp Carson, Colorado. On August 13th, 1944, the division moved by train to Camp Kilmer, New Jersey for movement overseas. This happened fifteen days later aboard the USS LeJeune, arriving at Cherbourg, France September 7th, making them the first American troops to land on the continent directly from the United Sates. The 413th Regiment spent 178 days in combat during three campaigns, Northern France (1944), Rhineland (1945) and Central Europe (1945). By wars end in Europe, May 8th, 1945 the 104 Infantry Division had suffered 1,294 killed in action and 5,305 wounded.(3)

Virgil now a Private First Class and his comrades boarded the SS Monterey on June 26th, 1945 and arrived at Staten Island July 3rd. The men were given a 30 day leave and reassembled at San Luis Obispo, California August 13th to the 18th. The plan was to go into intensive training for combat in the Pacific, but the atomic bombs dropped on Hiroshima and Nagasaki, Japan interrupted these preparations.(2) Virgil was honorably discharged December 13th, 1945. He was awarded the Bronze Star Medal, Army Good Conduct Medal, American Campaign Medal, European–African–Middle Eastern Campaign Medal with three bronze service stars and the World War II Victory Medal. 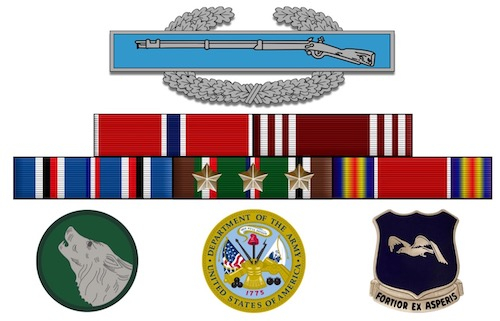 Returning to Texas, Virgil resumed his previous employment as a railroad fireman and lived with his parents Carla and Joe at 7233 South Hall Street, Houston, Texas. Joe passed at home of cancer in 1951. On February 4th, 1956, at 10:18 a.m. while walking in the 8800 block of Hardy, Street, Houston, Virgil was struck by an automobile causing traumatic injuries. He was taken to the North Houston Hospital where he died six days later, February 10th at the age of 34.(4) His remains were transported to Timpson, Texas where he was buried in the Mount Olive Cemetery, Shelby County with his father Joe. His parents and siblings would also be buried there. His brother James who also served in World War II made application for Virgil’s Veteran Headstone on May 25th, 1961. Day is done, God is nigh.