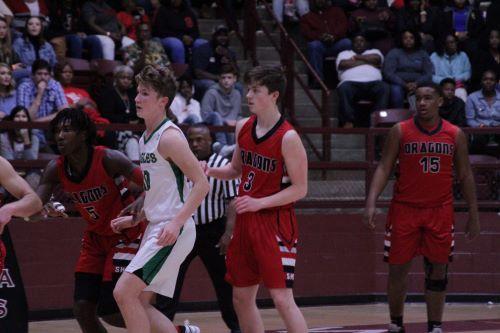 On Friday evening The Tenaha Tigers Boys Varsity fell to the Little River Academy Bumblebees by a 70-59 final score. Tenaha was on top early and led 19-10 at the end of the first period. The Bee’s bounced back and cut the THS lead to a single point by the halftime intermission where the Tigers led 32-31. Academy took a 10-point lead at 52-42 over Tenaha going into the final quarter. The 11-point win sends Academy into the final. On Saturday night they will square off with the Shelbyville Dragons at the THS Special Events Center at 8 p.m. for the final game of the 3-day tournament.

The Shelbyville Dragons made it to the finals by beating the Tatum Eagles 88-81 in overtime. The Dragons led 19-15 after one quarter and appeared to be taking control when they led 44-31 at halftime. Tatum never quit and chipped away at the SHS lead. The Dragons lead was cut to five points by the end of the third stanza and the Dragons took a 63-58 lead into the final frame. Tatum outscored SHS 19-14 points in the final period to tie things up in the fourth quarter at 77-77. The overtime period saw the Dragons outpace Tatum by a 11-2 margin to take the win. Tatum will now face off with Tenaha at 6:30 p.m. for the third-place game at Tenaha’s SEC.

Two of Shelby County’s local high school girl’s teams Tenaha and Timpson lost their semifinal round games. They will face off at 3:30 p.m. on Saturday, in the Tenaha SEC for the third-place trophy game. The Tenaha Lady Tigers fell to the Edgewood Lady Bulldogs by a 49-19 score. The Lady Bulldogs jumped out to a 10-0 point lead early, and a commanding 16-5 lead by the end of the first quarter. They never looked back or trailed.

The Timpson Lady Bears had a similar fate as they trailed the Martin’s Mill Lady Mustangs 18-4 after one quarter of play. By halftime the MMHS lead grew to 30-10. The game saw the Lady Mustangs win 51-31 and head to the tournament final with Edgewood on Saturday at 5 p.m. this afternoon at the Tenaha SEC.

The Tenaha Lady Tigers and Timpson Lady Bears will face off at 3:30 p.m. on Saturday for the girl’s third-place trophy game.