The Fly by Doug Fincher

“Like a dog going back to the food which he has not been able to keep down is the foolish man doing his foolish acts over again.”
May 18, 2020 - After working in the garden and piddling in my gun shop today, I came in to check my email. As I was reading it, I noticed a fly had flown into my half-filled glass of water. He was one of the bad ones, the green ones, the kind that hang around carcasses and filth.
My first thought was to let him drown and periodically checked to see if he had. He incessantly buzzed the glass’s periphery and was a real fighter. When he finally quit moving, I felt guilty for letting him die. As a penitent gesture, I lowered a ball point pen down to him and when the seemingly dead fly crawled up on it, I lifted him to safety. After testing his wet wings for a moment, he took flight again and began terrorizing me with erratic bump-and-fly tactics.
My son Mark called about that time and as I was telling him about the dive-bombing insect, he landed again in the same glass of water and resumed his “gasping for breath” routine. I opened a window and poured the water and the fly outside to fend for itself.
That fly reminds me of people who promise God everything if He will just save them. Then when the danger is over and their wings dry, they fly right back in. They cannot blame God for being back in their predicament. Rescuing us from the water is God’s part. ... but staying out of it is ours. 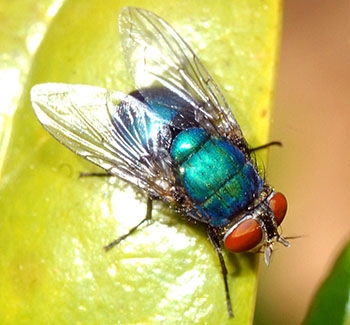