March 26, 2020 - Among music industry professionals and educators in Texas and throughout the U.S., the name of Darrell Holt is synonymous with jazz excellence.

The late Holt, former associate professor of music at Stephen F. Austin State University, is among the inductees in the inaugural class of the Texas Jazz Educators Association’s Hall of Fame. The announcement was made at last month’s Texas Music Educators Association convention in San Antonio where some of Holt’s former colleagues from SFA, former students and admirers from across the nation heard the news. 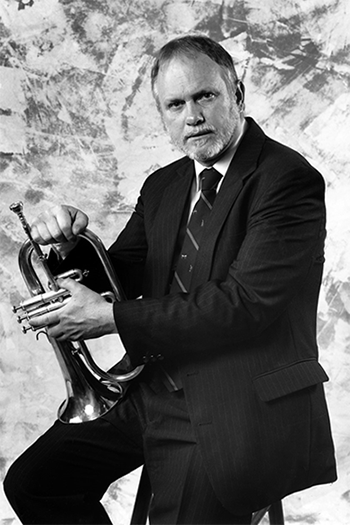 Dr. Deb Scott, professor of trombone in the SFA School of Music, was among those who spoke during the induction ceremony that honored Holt’s legacy and included the announcement of six additional first-class inductees. Among those were two other people with strong jazz connections to SFA – music alumnus Wayne Dyess, ’70 and ’71, and a former director of the Swingin’ Axes jazz band and former chairman of the SFA music department, Gene Hall.

Scott spoke of how Holt “left a lasting impression on our faculty and students,” she said.

Laura Holt Treadaway, Holt’s widow, expressed great appreciation for the honor and the acknowledgement of Holt’s love of music.

“What a wonderful honor this is for Darrell to be selected, along with these other amazing jazz musicians, to be inducted into the TJEA Hall of Fame,” she said. “Our family is so, so proud for him and so grateful to all those responsible for making his nomination possible. What a wonderful tribute to him, and we know he would have given all the glory to God for this honor and for his talent.”

Holt taught various jazz courses, arranging and music theory at SFA from 1968 to 2000. According to his biography published by Northeastern Music Publications Incorporated, Holt was a nationally recognized jazz instrumental and vocal clinician during most of his life. Holt performed extensive work in recording studios as a conductor, arranger, composer and performer, having produced more than 40 albums. Among his Nashville studio work was for a CD for then young country music artist LeAnn Rimes. As a performer, Holt was an accomplished pianist, vocalist and trumpeter. He worked with such nationally recognized entertainers as Rich Little, Bob Hope and B.J. Thomas. Holt's works have been performed by the San Antonio, Dallas and Nashville symphonies, as well as the Symphony of Southeast Texas and the Kingwood Pops. He received numerous commissions, including a grant from the National Endowment of the Arts. Holt passed away from heart complications in 2000. Donations to an SFA scholarship honoring Holt can be made at https://forms.sfasu.edu/giving/onlinegift.asp?give-to-other=Darrell+Holt+Music+Scholarship.

Dyess graduated with a Bachelor of Music from SFA, where he was selected as music alumnus of the year in 1990 and inducted into the School of Music Wall of Honor. He earned his Master of Music from The Catholic University in Washington, D.C., and Doctor of Education from the University of Houston, having also completed additional graduate work at the University of Texas at Austin. Dyess was also the principal trombonist with the Symphony of Southeast Texas and performed regularly throughout the United States and internationally with several groups, including Keith Brion’s New Sousa Band and the Brass Band of Battle Creek (Michigan). From 1970 to 1974, Dyess was trombone soloist and section leader of the “World’s Finest” United States Navy Band. Dyess joined the music faculty at Lamar University in 1977. He was professor of trombone and director of jazz studies at Lamar University upon his death in 2013.

A saxophonist, arranger and music educator, Hall graduated with an M.A. from North Texas State Teachers College (now the University of North Texas) in Denton, and after playing with a number of bands in Texas and working in radio, began teaching at his alma mater in 1947. He received his doctorate from New York University. Hall's North Texas State dance band was selected as the best in America among college groups by the American Federation of Musicians in 1959. Hall developed a jazz program at Michigan State University, where he had accepted a teaching position. He later served as chairman of the music department at College of the Desert in Palm Desert, California, and at SFA. He was a principal mover in the formation in 1968 of the National Association of Jazz Educators and served as its first president. Hall received the Hall of Fame Award from the International Association of Jazz Educators in 1981. In 1992 he received the Down Beat Achievement Award for Jazz Education. Hall died in Denton in 1993. The Dr. M. E. "Gene" Hall Award, given at the annual North Texas Jazz Festival in Addison, was named in his honor.

Others named to the inaugural class were John Murphy, Leon Breeden, Conrad Johnson and Edward Trongone.