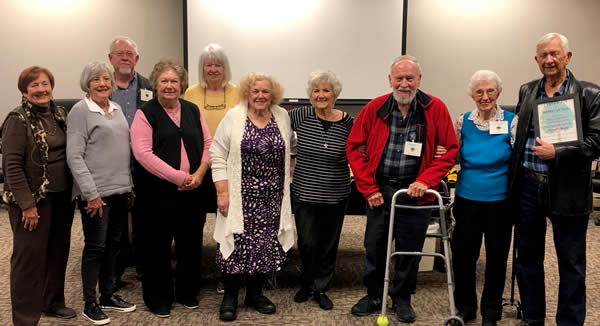 November 18, 2022 - Neil Grant, Timpson High School Class of 1957, noted East Texas band director, member of the Texas Bandmaster's Hall of Fame, and retired owner of Tatum Music shared the history of the THS Bear Band with members and guests at the November monthly meeting of the Timpson Area Genealogical and heritage society last Wednesday. Attendees included former Bear Band director Denny Whitley and a large number of former band members who shared memories of their time in the band. “For a small school, Timpson has had a tremendous impact on public school bands throughout East Texas, primarily because of some directors who were here, some students who were in the band, and the accomplishments of the band” Grant stated.

“Before World War II, most schools didn't have bands, although there was usually a municipal band, many of which were sponsored by the railroads,” Grant began. “Timpson had a municipal band but just before WWII local musician and auto dealer Raymond Rose joined the faculty at THS and began a music program. However, the high school band as we know it didn't flourish until after WWII. In 1948 Wallace Read became the band director at Timpson High School”. Helen McCauley Billingsley, who was in the band at that time as an elementary school student and later was a member of the All-State Band, recalled that they marched in a triangle formation, not a rectangle is is now standard. “Wally Read left Timpson after one year and, after working in several East Texas schools over the years, became the band director at Kilgore College, where he served for many years. He was inducted into the Texas Bandmasters Hall of Fame in 2000. So, Timpson had a pretty adept band director right off the bat,” Grant continued. 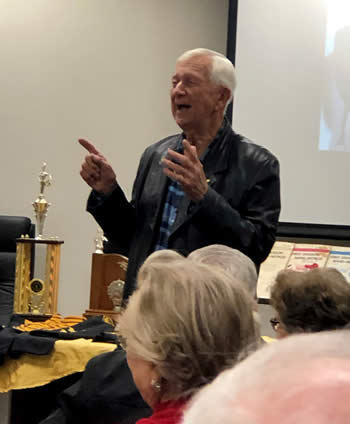 “After Mr. Reed left we had Jimmie Hudgens for three years. Before Mr. Hudgens, Timpson had not had band uniforms so in 1949 when he heard that Leverett's Chapel, a rich oil-field school north of here whose colors are black and gold, was getting new uniforms, he convinced them to sell us their old ones. I remember when I got that uniform, I was so proud of it. It might have been used but we took that Leverett's Chapel off and put Timpson on there some way and wore them with pride. It was Jimmie Hudgens who designed the band uniforms that Timpson still uses in 1951. I was in the band by then and I remember him handing me a used $35 trumpet, a momentous event that changed my life. Some years later Hudgens was named band director at SFA and fellow Timpsonian Lester Hughes and I were in the SFA band. So we had him as a director twice,” Grant revealed. “Practically every band director in East Texas, with the exception of Denny Whitley, came out of SFA and the program Jimmie Hudgens had a hand in establishing, a further indication of the influence Timpson has had”. Jimmie Hudgens was inducted into the Texas Bandmasters Hall of Fame in 2004.

“Another notable band director who worked in Timpson schools was Pete Rodriguez. I'm sure many of you remember him. His father had been a military band director so he had grown up around bands. Pete was a terrific clarinet player. He could double-tongue and triple-tongue on the clarinet, which is very unusual, because you usually hear that only on brass instruments. He wound up down at Bryan, where he was very successful for many years”. “He sometimes counted off a piece with 'uno, dos, tres” recalled one audience member. Pete Rodriguez was inducted into the Texas Bandmasters Hall of Fame in 1995. 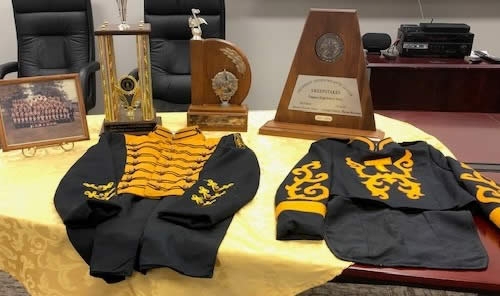 “Kenneth Caldwell came to Timpson in 1954 after Pete Rodriguez. His first year he had two All-State Band members and won a UIL Sweepstakes. He left Timpson when he was drafted into the Army (!). Later Caldwell was band director at Nacogdoches and Weslaco and then at El Camino College in California, The University of Northern Arizona, The University of Wisconsin, and Northwestern State University in Nachitoches, La.” Grant said. He was awarded a Ph.D from Arizona State University in 1976. He owned Loveall Music in Texarkana from 1986 until 2000. Caldwell was inducted into the Texas Bandmasters Hall of Fame in 2001.

“If you talk about Timpson bands, the name Bobby Goff is one of the first to come up. He was here from 1955 until 1965 and the band was very successful under him, winning five consecutive UILSweepstakes . After Timpson he was at New Boston for a long time and finally at Hallsville for years.”

Bobby Goff was inducted posthumously into the Texas Bandmasters Hall of Fame in 2005. His widow, Margaret Goff of Timpson is a TAGHS member and was in attendance. 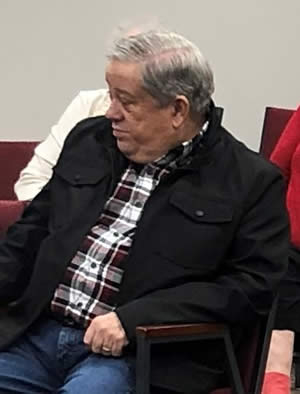 Upon graduation from ETSU in 1971, Denny Whitley became the band director at THS as well as the Minister of Music at Timpson First Baptist Church. “Mr. Whitley served successfully in Timpson for five years and is pretty famous among music educators in East Texas. He has helped a lot of young band directors along the way and he's here with us today.” Mr. Whitley recalled that during his tenure at Timpson, Tenaha didn't have a band and Timpson would play at Tenaha's Homecoming game. He credits long-time Timpson teacher and principal Herbert Eakin, for whom Timpson's stadium is named, for much of his early success through Mr. Eakin's support, encouragement, and friendship. “Once we were in Pensacola, Florida and one of our band members had a death in the family and had to leave. Mr. Eakin marched with the band in her place. He once honored Mr. Eakin by having him conduct the band in a public performance. Denny Whitley was inducted into the Texas Bandmaster's Hall of Fame in 2017.

“Timpson's current band director is Johnnie Cotton, who went to school with my son Doice. He was the drum major at SFA and has taught at Overton, Mexia, and Center, among others. He has been successful everywhere he has been. He is in his first year here and the band had a few difficulties earlier but they really hit their stride at the State 2A Marching Band Contest at Baylor earlier this month. They looked good and they sounded good and brought home the Bronze Trophy”.

Following Mr. Grant's talk members and guests shared memories and asked question about Timpson's band, one of which concerned the future of military-style marching bands, such as Timpson's. “We are in the heart of military-style country here. Most bands have gone to a corps-style band. East Texas is one of the few places in the world where military-style bands persist and are popular. There are enough dyed-in-the-wool people around who grew up in bands like Timpson or Longview or Lufkin or Nacogdoches that I think it will continue here. We like it and we're good at it,” Grant answered.

Looking over the display of vintage Timpson band uniforms and trophies, Grant observed “Timpson's uniforms have remained the traditional military-style over the years and they are not cheap. This uniform here would probably cost about a thousand dollars now. I mentioned the used $35 trumpet I was presented by Jimmie Hudgens. That trumpet would cost about $1500 now. An all wood clarinet is about $1500-1800 and a saxophone is about $2000. It takes a lot of money to have a band and Timpson can be proud of what they have accomplished over the years and the tradition that carries on to this day”.