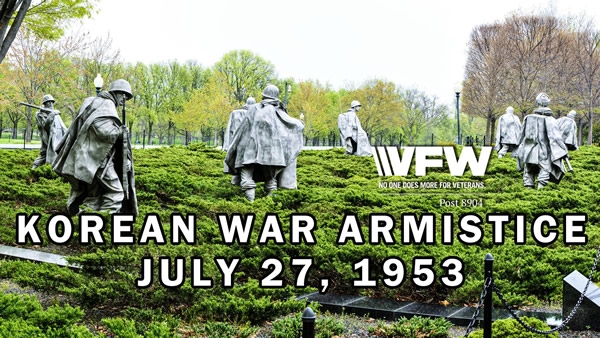 July 27, 2021 - On June 25, 1950, the North Korean Army began an offensive to invade South Korea that resulted in the capture of the republic’s capital, Seoul, within four days. The United States, the United Kingdom and other members of the United Nations moved to actively defend South Korea – an effort that would last until July 27, 1953, when negotiations concluded and fighting finally ended.

To commemorate the service and sacrifice of those who served in the Korean War, Shelby County Memorial Veterans of Foreign Wars Post 8904 and the Auxiliary will hold a remembrance program at the Veterans Memorial on Tuesday, July 27, 2021, 10:00 a.m. that will include the reading of names of Shelby County Veterans lost and the playing of Taps in honor of all those who died in the service of their country during the Korean War and those who served and have since passed.

As always the public is invited to remember their fellow Americans. Contact Post Quartermaster Larry Hume, 936-332-0349 or chiefhume95@gmail.