How the Surge in Lumber Prices is Affecting Landowners 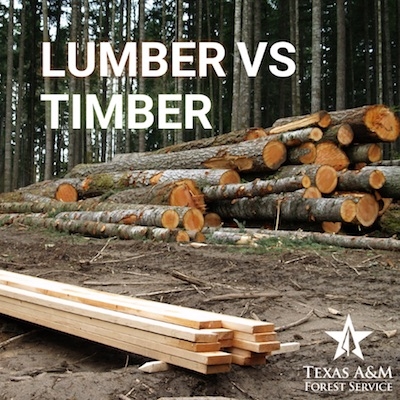 June 10, 2021 — Lockdowns from the pandemic have led to some unexpected economic consequences, one of which has been a surge in lumber prices. Sawmills shut down at the onset of the pandemic, while Americans across the country – forced to work from home – found the time and energy to remodel, renovate and, in many cases, relocate. The result has been a case study in forest economics. Demand for lumber went up, but supply went down: consequently, costs have skyrocketed over 300%.

In a simpler world, this would mean that everyday landowners who grow and harvest timber on their property have become the beneficiaries of an unexpected boon. But, as it turns out, timber prices (i.e. the price of felled trees sold to sawmills as logs) haven’t changed at all.

“The struggles that landowners had in 2019 went into 2020, and are now going into 2021,” said Jordan Herrin, an East Texas forester for Texas A&M Forest Service. “Really, life for your timber producer hasn’t changed much. It’s just been pretty steady.” 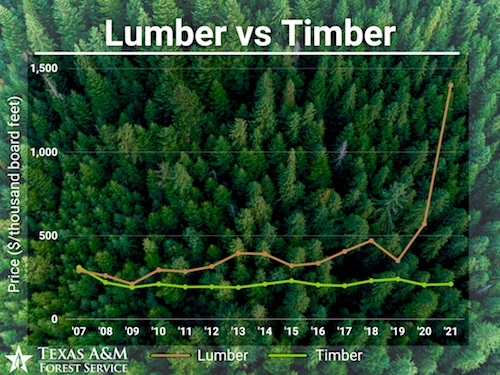 While steady might seem like a blessing in the wake of a global pandemic, timber prices in Texas have been the same for almost two decades. And that’s without taking into account inflation and other adjusted costs. Sawtimber prices plummeted in 2008 from the housing market crash, and they’ve flatlined nationally at about $25 a ton ever since. In Texas, that price has crept up to an average of almost $30 a ton – approximately the same price for timber in 2011, according to THIS report by Texas A&M Forest Service.

The Cause of the Disparity

This divergence between the cost of timber and the cost of lumber is counter-intuitive, to say the least; but the reality is that both are part of incredibly complex, and surprisingly different, markets. Consumers set the price of lumber based on the demand for processed wood and single-family homes, while sawmills set the price of sawtimber based on what landowners are willing to get paid.

The problem for forest landowners is the abundance of ready-to-harvest timber. Mature trees being harvested in East Texas today are likely between 30 and 35 years old. Thirty-five years ago, the U.S. was in the middle of a government subsidized tree-planting initiative.

The Conservation Reserve Program was signed by President Reagan in 1985 to “re-establish valuable land cover, help improve water quality, prevent soil erosion, and reduce loss of wildlife habitat,” according to the U.S. Department of Agriculture. Working forests also sequester carbon, reduce the impact of flooding, provide mental and physical health benefits for human beings, and – once those trees are harvested – the land is reforested, so that new trees can come in and provide all those same benefits time and again.

Despite all these advantages, the surplus of harvestable trees is just one of many factors contributing to the flatline in timber prices, according to Rob Hughes, the Executive Director of the Texas Forestry Association.

“Landowners have been struggling to get their timber harvested for a while,” said Hughes. “The mills are producing more wood than they have before, but it’s still not to the capacity of how much timber is being grown in their areas.”

A part of this divergence began with the housing crisis of 2008. Sawmills across the south had already been consolidating into fewer, more efficient locations – but with the sudden pitfall in demand, the number of sawmills were practically cut in half. In 1997, Texas had a total of 168 active sawmills across the state. Today, Texas has about 50.

A simple solution to this disparity would be to increase production capacity at current sawmills, and to increase the number of sawmills across Texas and the south. However, the realization of that solution isn’t so straightforward. Sawmills today are technical titans of industry that can take up to five years to build. One mill recently constructed in Lufkin, Texas, is estimated to have cost $200 million.

“It takes a lot of 2x4s to pay back a $200 million investment,” said Hughes, referencing the mill in Lufkin. “If you’re going to spend that much on a new sawmill, you’ll want to know that the demand is going to last until you can start making money.”

Texas sawmills are currently operational. However, many are struggling to operate at full capacity due to an unanticipated worldwide shortage in computer chips, OSB glue and other things like machinery maintenance parts. There has been a backlog of demand due to labor shortages, factory shutdowns due to COVID tracing and an overall lag in mill-to-market production.

How It's Affecting Landowners

The result is a buyer’s market. Landowners are competing with each other not only to sell their timber for a reasonable price, but to have their timber harvested in the first place. 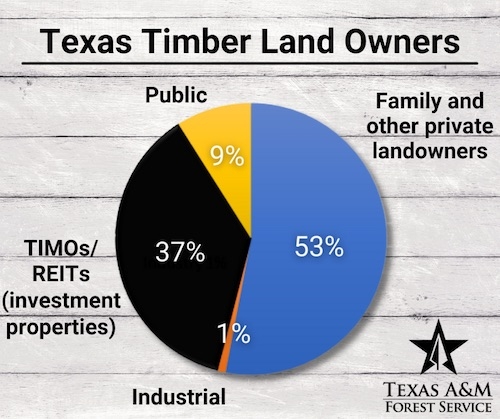 Investment and industrial properties control around 38% of working forestland in East Texas. But because they set a revenue target for the year, many of them will continue to harvest through lower timber prices in order to reach those targets. Since they have such large volumes of timber, smaller landowners are left merely to supplement what the industry giants put in.

“There are a lot of private landowners, especially on our western fringe and in Northeast Texas, that are struggling to find a market for their wood,” said Hughes.

Landowners without a market for their wood, or landowners who don’t want to accept the low payments for their timber, are left with very few options – and most of those aren’t promising.

A simple and obvious alternative for landowners is to wait. Trees will continue to grow, and the larger the timber, the more it should theoretically be worth – which is exactly what many landowners are counting on. However, that’s not quite how it works in the modern timber industry.

“Sawmills are built for a certain size log, now,” explained Hughes. “Once you grow it out of that size, there are fewer mills that will take those logs. So it kind of exacerbates your issues, because you actually limit your market the older and bigger your trees get.”

Hughes isn’t just speculating. This catch-22 has played out for small timberland owners before. After the housing market crash of 2008, timber prices plummeted, and many landowners who would’ve sold their timber delayed harvest. The result was a surplus of bigger trees on the market, which caused the price of those trees to drop, furthering the cycle of the stunted timber market.

Some landowners do have another option, though – to supplement their harvests by delaying them through carbon markets. Carbon credits are bought by companies or governments to offset greenhouse gas emissions. Typically, one carbon credit is issued for one metric ton of CO2 – about the same amount of CO2 that one tree will absorb in 40 years.

The catch, however, is that those credits can only be issued to timberland owners if their trees wouldn’t otherwise be there – i.e. if the forest is at risk of being harvested. Then there’s the issue of carbon credit contracts, which can restrict landowners from harvesting their timber for decades.

“There are a few contracts now that are just a one-year deal,” said Hughes. “These seem more tolerable to the production-minded forest landowners that we’ve talked with. You defer your harvest, and you get paid for that amount of carbon as you sequester it.”

As these short-term deals become more popular, Hughes sees them as a more viable option for landowners who want to supplement the price of their timber.

The third option is for landowners to try and harvest their timber now. For those with large tracts of land and staggered harvesting periods, this may be the best option. But for small landowners who might only harvest once in their lifetime, it’s a hard decision to justify – especially when they’re struggling to sell their timber at all.

Looking to the Future

There is some hope, though. Sawmills across the south are expanding their capacity to match the rising demand, and there have been several announcements of new mills to be built. As these new mills become larger and more efficient, they might match the demand for lumber across the country – but it’s going to take time.

Even then with these expansions, there still might not be enough production to correct the price of timber. The surplus of harvestable trees has existed for decades now, and demand isn’t likely to climb high enough to match that surplus. Rob Hughes, however, is staying optimistic.

“I think there is a light at the end of the tunnel,” said Hughes. “It’s called ‘Commercial Mass Timber.’”

Mass timber is the use of engineered wood products as the primary frame and structure for tall, commercial-style buildings. One category of mass timber, cross-laminated timber (CLT), is so promising that it is boasted to be as strong as steel, but lighter, more resistant to fire, easier to install, and carbon-neutral. Cement alone contributes up to 8% of total greenhouse gas emissions worldwide, according to think tank Chatham House. Steel production, meanwhile, requires the burning of coal.

“If just a small percentage of the commercial building market was mass timber, like CLT, then we would have to double the number of sawmills in the south just to keep up with that demand,” said Hughes, referencing a report by the Environmental Protection Agency.

The spread of mass timber wouldn’t just help the price of logs for landowners – it would also help the environment. A higher incentive to grow timber would lead more investors and entrepreneurs to forest land that might have otherwise been used for commercial or residential purposes. This would lead to more trees planted, which would contribute to overall carbon sequestration, water and air purification, and the countless other benefits that working forests provide.

Mass timber isn’t a new concept, though. It’s been around in one form or another for decades. Hughes is simply hoping that advancements in new technology, and the rise of CLT as an alternative to steel and concrete, might help give the timber industry the boost it’s been waiting for since 1985.