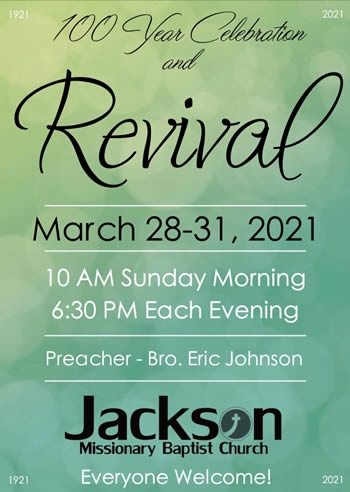 March 22, 2021 - Even before there was a building with the name "Jackson Baptist Church" on it, some Jackson Community people were meeting to worship God in an old stone building, referred to as Jackson School. As well as being a school, it was used for church services, singings, and singing schools. After a period of years, the need for a church was apparent. There was a Jackson Cemetery in the area, and .9 acres was donated for a church building next to the Jackson Cemetery.

Jackson Missionary Baptist Church was organized and dedicated on March 27, 1921 with 26 members. The membership was formed by people from neighboring sister churches. The building was built of ship-lap lumber and painted white. The building faced the "old road" to Joaquin; and, it had two doors on the front and one on the back. Three rows of home-built pews filled the rectangle shaped building. This church building was built with money furnished by the community, labor by membership, a love for God, and a desire to serve and worship Him.

For almost 30 years, services were held in the original building. However, on February 20,1950, the church appointed a committee for construction of a new building. On February 26, 1950, the original building was torn down and a second, one-story brick building was built. Labor was provided mostly by church members themselves. Some worked all day on regular jobs and came directly from those jobs to work on the church building, and also worked on Saturdays. Church members helped by buying doors, pews, and windows in their families' names.

In 1963, a parsonage was built and afterwards a dedication was held.

Through the years the church family grew, and once again the church appointed a new construction committee in 2013 to seek out expansion possibilities. After much searching it was determined, and approved by the church membership, that the church should relocate by purchasing 9 acres of land, and a third building be built.

“Mid-Construction” worship services were held throughout the building process so that members could see the progress being made. The building includes a sanctuary for worship, fellowship hall, kitchen, and Sunday School/Awana Ministry rooms for classes. The stain glass windows from the previous church building were incorporated into the design, along with the previous pulpit and other church furniture. On May 10, 2020, church members met in the new sanctuary for a Mother's Day worship service, and it was clear to see that the time had come to begin meeting permanently in the new church building. As the effort to complete this building continues, the church family at Jackson celebrates the 100th Anniversary of the church and carries on the vision that began in 1921. God continues to bless the church membership as He saves souls, changes lives, and builds His Kingdom.

To God be the glory!