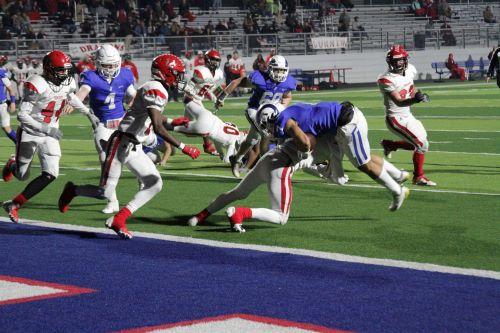 The Joaquin Rams varsity football team beat the Shelbyville Dragons by a 39-0 score to win a bi-district playoff game and move on to the area round of the UIL Football Playoffs next Friday.

The Rams took their first lead on a 39-yard touchdown completion to Maddox Hutchins with 5:56 minutes left in the first quarter. Jesus Bravo added his first of what would be three extra point kicks on the night. This gave Joaquin a 7-0 advantage. The Rams extended their lead to 14-0 when they recovered a Shelbyville fumble in the endzone with 5:36 still remaining in the opening stanza.

Two second quarter touchdowns scored by Lorenzo Lane and Gunner Nelson gave the Rams a 26-0 lead going into the locker room at the midway break.

Nelson scored his second touchdown of the evening with 9:53 left in the third period. This put JHS ahead 33-0.

The final score of the night came when Brandon Soto recovered and scored on a deflected field goal attempt at the end of the third quarter. This gave Joaquin a 39-0 lead.

Joaquin will face the 11-0 Alto Yellowjackets at Lufkin’s Abe Martin Stadium at 7:30 p.m. on Friday, November 22, 2019. This will be the Area round of playoffs.