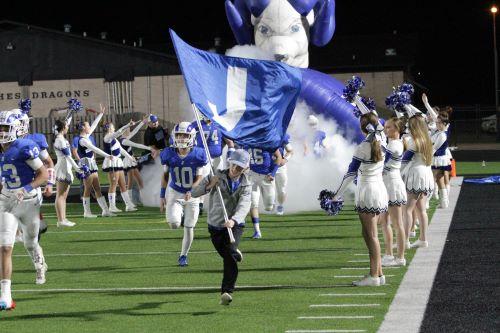 The Joaquin Rams varsity football team saw their 2019 season come to an end when Groveton defeated them 42-28 during Friday’s Region III elimination game at Nacogdoches High School. The Rams year ended with them holding an 11-3 overall record. The Rams were the second-place representative of District 11 2A and had a conference record of 5-1. Groveton stands at 12-2 and will face off next week with 13-0 San Augustine for the Region III title game.

The Groveton Indians took possession of the football first and drove the ball 72 yards for the first score of the game. Cade Steubing scored on a quarterback keeper run which covered the final 11 yards of the drive with 8:47 minutes left in the first quarter. Trent Torregrossa added an extra-point kick to give the Indians a 7-0 lead.

The Indians recovered an onside kick on the next play but Joaquin’s defense held on the next GHS drive and forced them to punt the ball away. It was an excellent punt that pinned Joaquin down at their own 1-yard line. Joaquin went the full 99-yards in 8 plays on a scoring drive which saw Connor Bragg score on a 68-yard run to paydirt. Jesus Bravo added an extra point kick which tied the game 7-7 with 3:06 left in the opening stanza.

Groveton retook the lead when they scored with just 29 seconds left in the first period. Another Torregrossa extra point gave the Indians a 14-7 advantage. This time Joaquin covered the Indian’s onside kick attempt and took over possession just 46 yards from the endzone. Lorenzo Lane wasted no time helping the Rams tie the game at 14-14, as he took a first-down carry 46 yards for the game-tying touchdown with just 16 seconds left in the opening frame.

Torregrossa grabbed a pass from Steubing for a 26-yard score with 9:56 left in the second quarter to give the Indians a 21-14 advantage. Another touchdown reception by GHS receiver Zach Fisher helped Groveton take a 28-14 lead at the 3:06 mark of the second quarter.

Joaquin drove for 50 yards and eventually a score on a 1-yard keeper run by Chandler Pritchett with 7:43 left in the third quarter. The Rams trailed GHS 28-21.

Groveton eventually claimed the next two scores of the contest ballooning their lead to 42-21 by the start of the four quarter. Joaquin continued to fight and Lorenzo Lane scored the game’s final touchdown with just 40 seconds remaining in the contest.