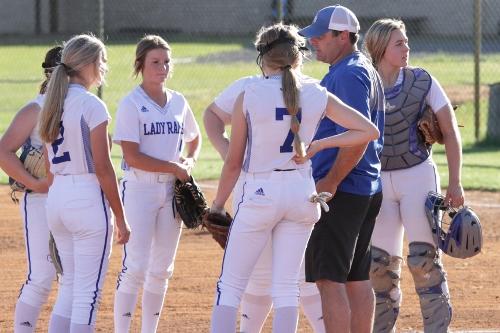 The Joaquin Lady Rams Varsity Softball Team fell to the Grapeland Sandiettes by an 8-6 score on Friday. The game was a bi-district Class 2A playoff between District 21 and District 22 schools. Joaquin’s season ended with them posting an 18-10 overall season and a 12-4 District 22 mark.

Grapeland now stands at 16-8 and they will move on to face the Woden Eagles next week.

Grapeland rallied in the top of the first inning and led 3-0 until Joaquin scored a run of their own in the bottom of the second inning, when Kalie Brooks led off by drawing a walk and she then scored on a hit by Ebbie McCann. Grapeland added two more runs to their tally in the top of the third inning and led 5-1. The Lady Sandiettes scored another run in the top of the fourth inning when Haylee Reed led off the inning with a double and was driven in by a double off the leftfield wall by teammate Kiera DeCluette. Kalie Brooks fired a strike to third base from the outfield to minimize the damage for Joaquin and this helped shorten the Grapeland at-bat.

Brooks started out the bottom of the fourth inning with a lead-off single to leftfield . Joaquin then scored three runs with a 2-out rally which cut Grapeland’s lead to 6-4.

Joaquin’s JJ Bass started another 2-out rally for Joaquin in the bottom of the sixth frame with a single up the middle to centerfield. Chloe Mason scored Bass with a single and then she herself ended up at third base after a Grapeland throwing error. Molly Mason scored Chloe Mason with a double to leftfield later in the inning. This cut the Grapeland lead to 7-6 but they later scored what would prove to be the final run in the top of the seventh inning.

Grapeland pitcher Cadie Currie struck out seven Joaquin batters, and walked four during the contest. She gave up 11 hits.

Joaquin’s Chloe Mason struck out three and walked three. She gave up 11 hits.