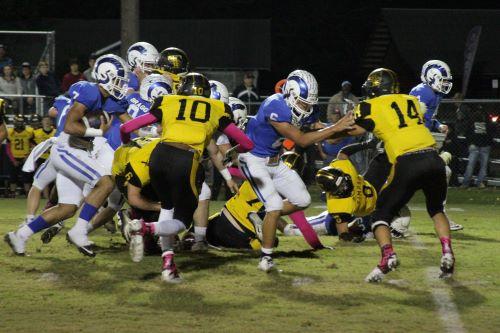 The Joaquin Rams varsity football team came away with a 21-14 win on Friday over the Timpson Bears. This game was a tale of to halves as the Rams led Timpson 21-0 at halftime but went scoreless themselves in the second half.

A 23-yard touchdown by Lorenzo Lane gave the Rams a 6-0 lead with 6:35 left in the first quarter. Jesus Bravo added an extra point kick to put the score at 7-0. Lane added a second scoring run with 7:46 left in the second quarter that extended the Ram’s lead to 13-0 after a failed extra point kick attempt.

Chandler Pritchett scored on a 1-yard keeper-run with just 8 seconds left in the first half to give the Rams a 19-0 advantage. Conner Bragg added a 2-point conversion run which gave JHS a 21-0 lead at the halftime intermission.

The Rams mounted a long 11-play drive to start the third period but missed a 26-yard field goal attempt with 6:41 left in the third period. Timpson soon after mounted a 9-play drive that covered 84 yards, and was finished off with a 36-yard keeper-run for a touchdown by Braden Courtney. An extra point kick cut Joaquin’s lead to 21-7.

The Rams drove the ball again on their next drive but again missed a field goal with 6:50 left in the ballgame.

Timpson was able to move the ball 82 yards and capped their drive with a 1-yard Courtney touchdown. Another extra point kick pulled THS to within seven points and cut Joaquin’s lead to 21-14 with four and a half minutes left in the game.

Joaquin was forced to punt the ball back to Timpson after their next drive stalled with 2:40 left.

A fourth down pass eventually fell incomplete on the Bear’s next offensive try which gave the ball back to the Ram’s with just 19 seconds left in the contest.

Timpson fell to 3-5 overall and their conference mark is at 1-3. The Bears will host Linden-Kildare next Friday. Kickoff is slated for 7:30 p.m. at Eakin Stadium.