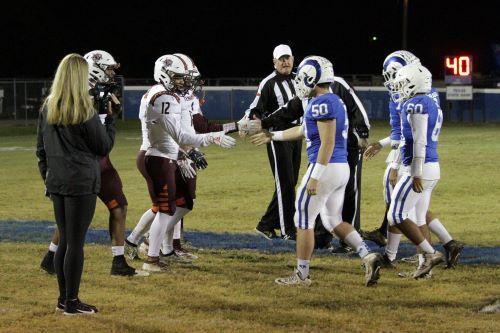 The Joaquin Rams shut out the Tenaha Tigers varsity football team on Friday and took a convincing 38-0 homefield win which moved their District 11 2A record to 5-0. The Rams season record stands at 8-1 and they have claimed at least a share of the District 11 title with one game remaining.

Connor Bragg got Joaquin on the board with a 10-yard touchdown run with 9:15 left in the first quarter. A Jesus Bravo extra point kick gave the Rams a 7-0 advantage.

Tenaha’s first offensive drive resulted in just one first down and they punted the ball back to the Rams with 6 minutes left in the opening frame.

Joaquin scored on a 9-play drive which ended with a Chandler Pritchett keeper run for a touchdown with 4:03 left in the first stanza. Another Bravo extra point kick gave JHS a 14-0 lead.

Gunner Nelson scored a rushing touchdown for the Rams early in the second quarter and gave them a 21-0 advantage. Bragg and Nelson each added their second touchdown runs of the night to extend Joaquin’s lead to 31-0 by the midway break.

With a running clock during the second half Joaquin only managed a single score which was a 45-yard touchdown pass reception and run by Bragg from Pritchett with 7:50 left in the third stanza.

Tenaha now stands at 4-5 overall, their conference mark is at 1-4. They will finish the season by hosting the Linden-Kildare Tigers at Raymond Jackson Stadium Friday, November 8, 2019 at 7:30 p.m.

Joaquin will head to Harleton next Friday for a 7:30 p.m. kickoff at Wildcats Stadium.