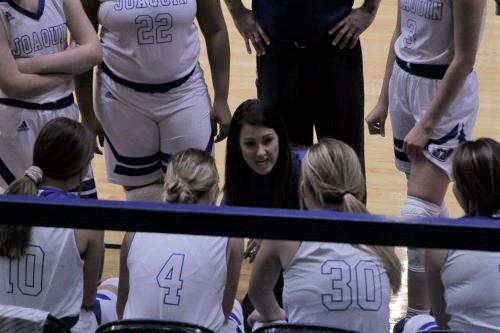 Both the Joaquin Rams and Lady Rams played in varsity basketball games on Tuesday at Joaquin High School. The Lady Rams beat the Lady Pirates from Martinsville by a 33-28 score in their first District 22 2A game of the year. The Rams later fell to the Slocum Mustangs by a 54-40 score in a pre-district matchup.

Riley Sherrod led the Lady Rams with 18 points for the day. Joaquin trailed 10-11 points at the end of the first period and Martinsville led 21-15 at the midway break. Five points on two consecutive drives down court by Sherrod gave JHS a 27-22 lead at the end of the third stanza.

The fourth quarter saw both teams battle to a 6-6 points quarter and Joaquin came away with the 33-28 win.

The Joaquin Boy’s Varsity led the Slocum Mustangs 12-9 at the end of the first quarter but trailed 21-23 at the halftime intermission. The Mustangs went on an offensive run in the third period and led 43-28 going in to the final period of play. Joaquin continued to play hard but made up little ground as they eventually took a 40-54 point loss.

The Rams will host Cumberland Academy on Friday, December 20, 2019 with JV tipping off at 5 p.m. Boy’s Varsity action will follow. The Lady Rams will head to Timpson and face the Lady Bears with JV starting off girl’s action at 5 p.m. The Lady Rams varsity team will tip off afterward.